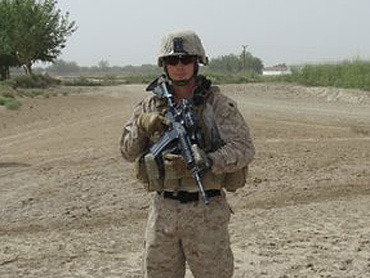 AMIR AGHA, AFGHANISTAN -- Staff Sergeant Adam Smith is in charge of a small outpost built under casuarinas trees in Amir Agha, which is about a mile's walk through wheat fields from the main operating base of Kilo Company in Hasanabad. He has been a Marine for 10 years, was in the invasion force of Iraq in 2003, and this is his fourth deployment.

He never would have guessed that his principal objective in this war in Afghanistan is . . . to open a school. Life is full of surprises.

Amir Agha is right on the fringe of the desert, and has a much-venerated Muslim shrine adjacent to the Marines' base. It used to have a bazaar when it was a Taliban stronghold, but the Marines leveled the bazaar and pushed the Taliban out. Now the locals seem quite happy to be living with Americans as their immediate neighbors.

Smith, who is "Staff Sergeant" to his Marines, is simply "Adam" to most of the locals, including the kids who mob him for candies whenever he goes out on patrol. He is an easy-going, affable man, and is happy to chat to anyone about whatever problems they have -- or say they have -- in the area.

On Monday he was stopped on the road by a man who said that he was a supervisor of a road-building project, but who was afraid that he would be targeted by the Taliban for doing his work. He was even nervous about giving his own name in case the Taliban thought he was an informer for the Americans. Smith promised to investigate.

And then he spent some time discussing with an older man in the village the delicate issue of bridge-building (or, more properly, bridge repair) that apparently some Marines had damaged, allegedly . . . but it wasn't entirely clear where the aforesaid bridges were, nor which Marines might have damaged them.

Such is the nature of the counter-insurgency role that has been thrust upon the Marines in Helmand. It may not be the traditional way Marines fight wars, but their commanders are convinced this is the way to defeat the Taliban. And priority number one in Smith's war to win hearts and minds is the Amir Agha school.

There hasn't really been a functional school system in this part of Helmand since the Soviet invasion three decades ago. Some kids got a rudimentary education at the local mosques, but the majority remained illiterate and unschooled, passing their childhood days herding goats and working in the fields.

The Marines helped to build a school in Amir Agha -- two solid brick buildings, each with four classrooms -- that the Taliban then tried to burn down last year. The roofs buckled and the furniture was all destroyed, but the Marines were determined not to give up, so they hired a contractor to rebuild the school. There are now Marines posted in the school compound around the clock to make sure the Taliban pyromaniacs do not return.

Smith's main problem now is getting the Afghan government to provide the funds to pay the teachers' salaries -- a no-brainer, one might think, in most societies. But here in southern Helmand, where the Afghan government is almost non-existent, it is extremely difficult even to find an official to talk to, let alone to appropriate the necessary funds.

The school year starts at the end of August. It will be an uphill battle. But Marines thrive on steep challenges.

In Mud Fort, Marines Handle "Dust Up" with Afghan Locals
Specially-Trained Dogs Help Marines Sniff Out IEDs
Marines Navigate Poppy Fields and the People in Afghanistan
Marines Push Taliban Back from Base