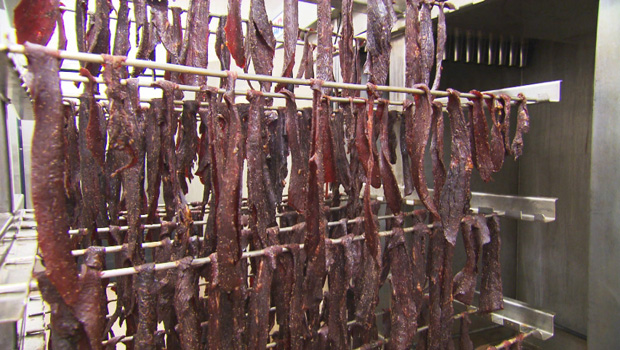 Jerky doesn't have to be a tough sell to folks with sophisticated tastes -- not when there are gourmet varieties like the ones our Barry Petersen has been sampling:

Once the snack food of last resort, purchased with a tank of gas, jerky is shedding its plastic wrapper -- and its junk food status.

As demonstrated by Colorado Springs bison rancher Peter Popp, "You're gonna get our soy sauce and Worcestershire sauce, so you're gonna get some of that tang that's gonna hit your tongue about the same time the salt does. That heightens all the flavors in it. The smoke flavor was something more. It's not just the campfire smoke. It's that gunsmoke. It's that flavor you get from there."

"You sound like you're describing a fine wine," said Petersen.

Yes, a fine jerky. In this case, Bison Jerky, crafted by Popp.

No shameful snacking here at Black Forest Bison, just award-winning flavors like Gunsmoke and Caliente Canyon -- not to mention their "Butt-Naked" recipe: Bison, Salt, Pepper . . . and nothing else.

Petersen asked, "Do you think it's on the way -- or maybe it's arrived -- as kind of a gourmet food?"

"I think it's already arrived," said Popp. "And when I started the jerky, I was really looking for something to do with a piece of buffalo I didn't have much market for. And now, it's probably 60 or 70 percent of my business.

"People have responded. They've tried it, they want it."

How much do they want it? In just the last five years, sales of dried meat snack have soared in the U.S. by a nearly a billion dollars.

And appetites are growing far beyond cowboy country: New York City's Dean and Deluca sells Peter Popp's bison jerky for $17 a bag, or more than $70 a pound -- a price tag that shouts "gourmet" even louder than the ingredients.

If by now, you're dying to ask: "Where's the beef?" it's in College Station, Texas, home to Texas A&M University, where jerky-making is part of the curriculum.

Ray Riley manages A&M's Meat Science and Technology Center, where he helped refine their recipe back in the early 1980s.

He's a jerky expert, but not an elitist. "No, I'm not a jerky snob," he laughed. "Now, I do like our jerky. And if we're traveling I've always gotta buy another person's jerky to kind of compare it. And so far, I feel like ours is still the best."

Good taste cannot be hurried -- Riley's jerky takes a week to prepare, rather than hours, like most mass-market products.

That's fitting for one of humankind's most primal foods -- the original meal-to-go. Every ancient culture had its own recipe for preserving meat.

We owe the word "jerky" to the Quechua of South America, who call it "ch'arki."

Centuries' of debate about taste go on today

"The key again is good, solid muscle," said Jeff Savell, a distinguished professor of meat science at Texas A&M. "The way it's cut, it's dry, but it's not tough."

As A&M faculty and students prepared for their weekly barbeque, Savell enjoyed a jerky appetizer.

"To me, I like doing it more like that -- bite-sized pieces -- instead of taking a big piece of jerky and trying to tear across. I like kind of taking these small pieces."

In other words, take your foot off the gas, and savor the taste. Enjoy jerky in the slow lane -- or better yet, at an idle.