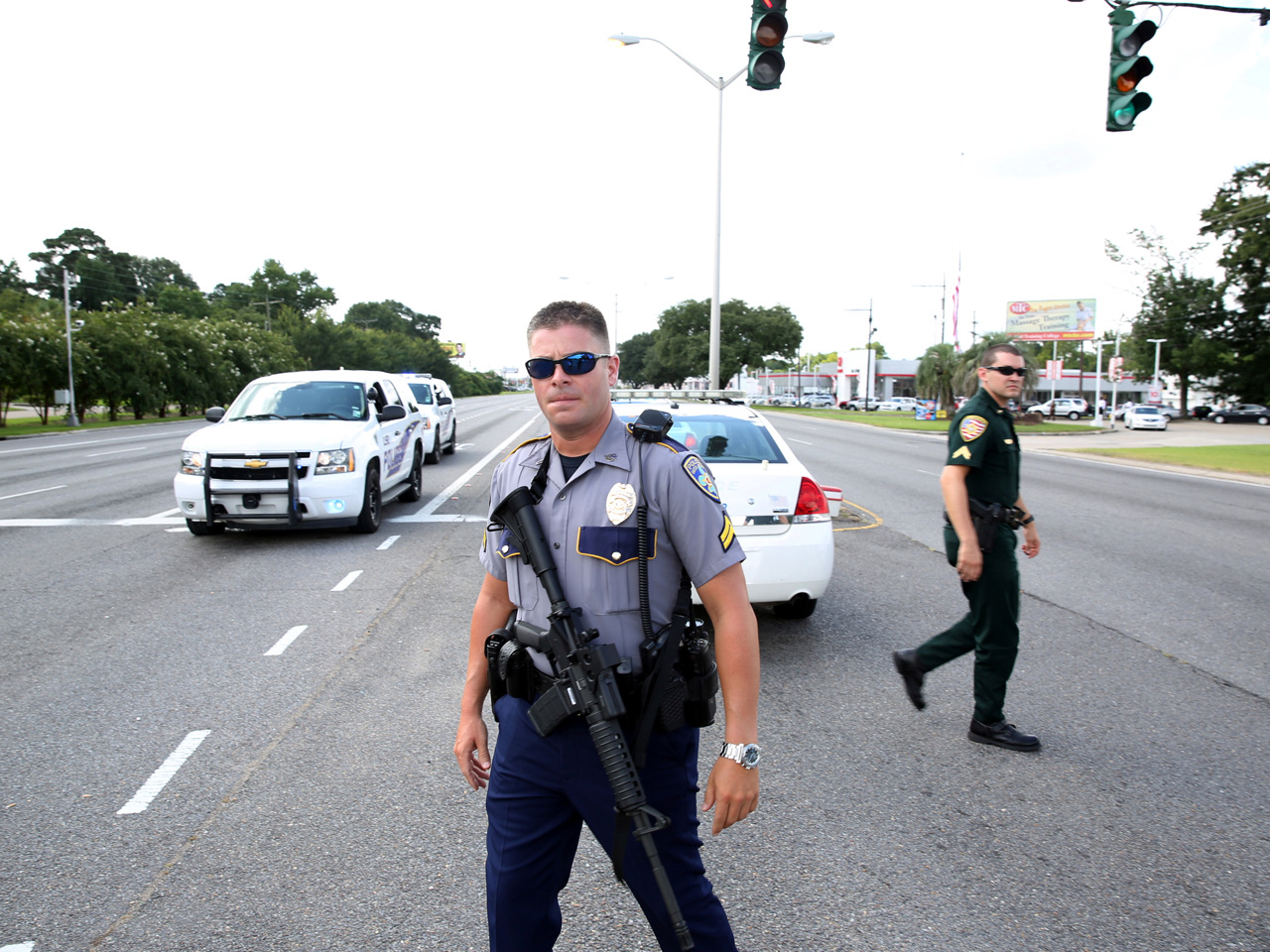 Initially, police told CBS News the three wounded officers were in "very critical" condition. Hospital officials later said one was in critical condition, one was in fair condition, and one was being treated for "non-life-threatening injuries."

Police say 29-year-old suspect Gavin Eugene Long was wearing all black and carrying a rifle when officers first encountered him at about 8:40 a.m. Shots were reported fired two minutes later, and the first report of an officer down came in two minutes after that.

By 8:50, Long had been killed, along with two Baton Rouge police officers and an East Baton Rouge Sheriff's deputy.

A military source tells CBS News that Long left the Marines in 2010 with an honorable discharge. His final Marine rank was E-5 (sergeant).

Law enforcement sources tell CBS News that Long used the pseudonym of Cosmo Setepenra. He posted at least one video on YouTube about oppression and police protests.

All three of the slain law enforcement officers in Baton Rouge have been identified.

According to officials, one of them is Matthew Gerald, 41, of Denham Springs.

Gerald was a former Marine, a former Black Hawk Crew Chief in the Army. He just graduated from the BRPD Academy in March, CBS affiliate WAFB reported.

James said he knows Jackson and his family personally and spoke to the family earlier Sunday.

"The violence, the hatred just has to stop," said Edwards. "These men risking their lives to protect and serve the community, to be taken out the way they were, they are real life heroes."

Police responded to a report of officers shot at a location on Airline Highway near Old Hammond Highway around 9 a.m., reports CBS affiliate WAFB.

The shooting happened near the B Quick store on Airline Highway. Coppola said that authorities believe the "scene is contained."

"I do not have the extent of the injuries," Sgt. Coppola told WAFB.

DeRay McKesson, a prominent Black Lives Matter activist, called for peace Sunday in an interview with The New York Times.

"The movement began as a call to end violence," McKesson said. "That call remains."

Baton Rouge has been tense since the July 5 shooting of a black man pinned to the ground by white police officers.

At a three-hour service Friday, mourners paid their respects to 37-year-old Alton Sterling, whose shooting outside a convenience store began a tumultuous week in race relations in America.

On Friday, grieving residents of Baton Rouge honored an appeal at the funeral of Sterling to celebrate his life rather than demonstrate about his death.

"If you want to protest, please leave now," Gary Chambers, master of ceremonies for the funeral, said at the beginning that the event at Southern University.

A steady stream of mourners filed past Sterling's casket, which was adorned with music notes and a smiling photo of the man. Sterling was selling CDs outside the Triple S Food Mart store, as he had done for years, when he was killed by police responding to a call of a man threatening someone with a gun. Police have said they found a gun in Sterling's pocket.

Sterling's death was captured on cellphone video and circulated widely on the internet. His death, along with another fatal police shooting in Minnesota last week, sparked widespread protests. Then the fatal shooting of five police officers in Dallas by a black sniper heightened tensions even more.

Sterling's death heightened tensions in Baton Rouge, where about 200 protesters were arrested over the weekend. East Baton Rouge Parish District Attorney Hillar Moore said his office reviewed initial police reports on 185 arrests between July 8-11 and determined it will not prosecute roughly 100 of those cases.

Moore said they involve protesters who were arrested only on misdemeanor charges of obstruction of a roadway or public passage. DeRay Mckesson, a prominent Black Lives Matter activist, was among them. Moore said his office is reviewing the rest of the arrests, which include allegations such as resisting arrest, carrying guns or some "act of violence."