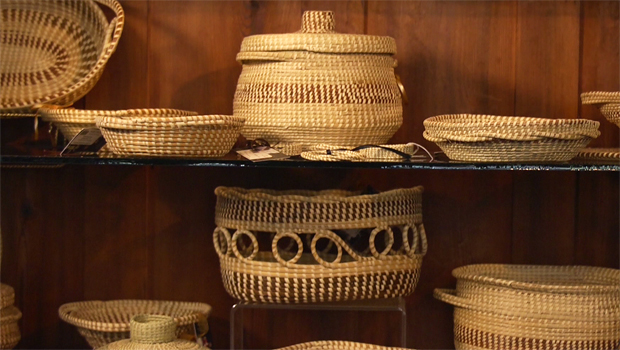 Outside Charleston, S.C., Highway 17 looks like another Southern country road. It's actually a working art gallery of sweetgrass baskets.

"All of the basket makers are artists," Henrietta Snype told correspondent Mark Strassmann, "No matter how they work on their basket, they all are considered an artist."

"What does it represent to you?" Strassmann asked.

"I told people when I do these baskets it reflects my entire community," she replied. "I never look at the basket and say, 'Ah, this is what I do. This is what my family do.' I represent a community."

That community is the Gullah, descendants of West African slaves first brought to coastal South Carolina and Georgia in the early 1700s. They wove baskets from native grasses and plants out of necessity. Before these baskets became art, they were tools.

"Charleston was a place that grew a lot of rice," said Snype, showing one particular design used on the plantation. "When the slaves would go out and gather the rice, they would put it in this particular style of basket. And they put all of the rice after they gather it, put it in here, and then they would throw it up in the air -- and you feel the breeze."

The grasses for the baskets grow wild. Lynette Youson took Strassmann to one field. She grabbed the green sweetgrass by the handful and -- with her foot on the root -- pulled it out of the ground. "And it's just that easy," she said.

Free materials, but a lot of labor.

"You tie a knot and then you work around that knot -- it's like crocheting," Youson said. "I can do a basket like this, maybe, roughly in about ten hours."

Simple baskets can sell for $40. Elaborate pieces, often prized by collectors, can go for $8,000.

Kimberly is a sixth-generation weaver. And Lynette's granddaughter, Allisse -- they hope -- will be a seventh.

"What goes through your mind when you look at them?" Strassmann asked.

"Honey, I look at love, heritage, you know?" Lynette replied. "'Cause when I'm weavin', it seems like I'm in my own world. I don't have a thing to worry about."