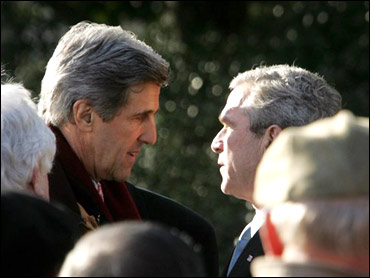 It's not exactly like former presidents and rivals George H.W. Bush and Bill Clinton traveling around the world together to visit tsunami-ravaged areas. But the two most recent presidential rivals did spend Wednesday afternoon together talking baseball.

Later, Bush and Kerry headed separately to the South Lawn of the White House to honor Kerry's beloved World Champion Boston Red Sox - the winners of a World Series that Kerry almost missed in its entirety while he was on the road campaigning.

In fact, Kerry almost missed the celebration at the White House thanks to the disadvantage of no longer having Secret Service protection.

Because the Jackie Robinson event ran long, Bush was 25 minutes late to the Red Sox event at the other end of Pennsylvania Avenue. But since Bush was in his motorcade - and Kerry had to sit in regular traffic - the president arrived at the White House before his former rival and started the event before Kerry got there.

"So, like, what took you so long?" joked Bush, not about Kerry's tardiness but about the 86 years since the Sox last won the World Series.

Kerry, sporting the gold Timberland barn jacket he famously wore on cold days during his 2004 campaign, briefly chatted with Bush after the president's salute to the Red Sox.

Kerry spokesman David Wade quipped that if President Bush had his way, the Red Sox would not have had the chance to be in the World Series last year. He pointed out that the Red Sox entered the playoffs as a "wildcard" - the team with the best record among those not winning their division.

However, during his White House remarks, Bush briefly referred to the heated 2004 campaign and attempted to bury the hatchet. "I like to see Sen. Kerry except when we're fixin' to debate," kidded Bush.

Kerry countered: "Hopefully, this day free of political squabbling won't be as rare as Red Sox World Series championships have been these last 86 years."