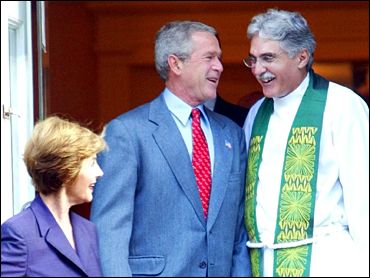 President Bush on Monday is going to one of the most contested states to sign his fourth tax cut in four years, as Sen. John Kerry stumps in New Hampshire and Pennsylvania, cheered by new polls showing he has erased the lead Mr. Bush held through much of September.

A Newsweek poll actually had Kerry ahead, though by less than the margin of error. A CNN/USA Today poll following Thursday's debate has the two candidates dead even.

Meanwhile, the campaigns are preparing for this week's matchup between Sen. John Edwards and Vice President Dick Cheney. The presidential understudies meet Tuesday at Case Western Reserve University in Cleveland for their only debate of the campaign.

The White House is holding the tax cut signing ceremony Monday at a YMCA in Des Moines, Iowa — a Democratic area of a state that Mr. Bush lost by a razor-thin margin in 2000. Kerry, follows Mr. Bush into Iowa this week, appearing Tuesday in Tipton to discuss issues that concern middle-class Americans.

An estimated 94 million Americans will be affected by the tax relief, which keeps three middle-class tax breaks from expiring Jan. 1 and revives other tax incentives for businesses.

The tax package that Congress passed last month will keep the per-child tax credit at $1,000 for five years, extend the broader 10 percent tax bracket for six years and retain for four years a provision giving married couples relief from the so-called marriage penalty.

The tax relief will cost $131.4 billion in government revenue over the next decade. In addition, Republicans added provisions to extend 23 tax breaks for businesses that were set to expire.

Kerry backed the middle-class tax breaks, saying they helped families being squeezed by a weak economy, falling incomes and rising health costs. But he has proposed rolling back the tax cuts for families making more than $200,000 and using the savings to make health care and education more affordable.

The Massachusetts senator also has proposed new tax cuts to help middle-class families — relief he says won't increase "the deficit by one dime."

Mr. Bush, who holds an "Ask President Bush" event in nearby Clive, Iowa, later Monday, hopes to win Iowa by appealing to conservative Democrats, particularly Roman Catholic voters who tend to side with the GOP on abortion, gay marriage and other social issues.

In New Hampshire, Kerry is holding a town meeting to attack the president's ban on federal funding of most embryonic stem cell research. The Democrat is being joined by actor Michael J. Fox, who suffers from Parkinson's.

With a new campaign ad, Kerry criticized Mr. Bush's decision to forbid federal funding for research on embryonic stem cell lines created after Aug. 9, 2001, a policy that critics say stifled research. Some religious and conservative organizations oppose the research because days-old embryos are destroyed in the process.

Kerry promises $100 million a year flowing into the research and strict ethical oversight.

In Philadelphia, Kerry will meet with African-American ministers. Sunday, at a church in Cleveland, he warned the GOP is trying to suppress the black vote. He says his campaign is enlisting lawyers to fight the efforts, saying "memories of 2000" are strong.

The Bush-Cheney campaign said the charges of voter suppression "have no basis in reality."

While vice presidential debates typically have little influence on the race overall, there could be extra interest in this faceoff given the stark contrast between the rivals, Cheney's status as one of the most powerful vice presidents in history and the intense criticism he has drawn from Democrats.

"It's more a curiosity than a dealmaker or dealbreaker," said Timothy Walch, director of the Hoover Presidential Library and an expert on the vice presidency.

Edwards, with proven skill at lobbing sharp attacks without turning off the charm, can draw on more than two decades of courtroom practice at cajoling juries to side with personal injury complainants.

But he must avoid coming off as a young upstart who is disrespectful of an elder statesman. If the North Carolina senator goes over that line, he will play into the Republican argument that he lacks the gravitas and foreign policy experience for the job.

Cheney, who served as President Ford's chief of staff at age 34, spent five terms in Congress and served as secretary of defense during the 1991 Gulf War, will be hard to unnerve.

He could well face questions about allegations of conflict of interest that arose after Halliburton Co., which he once led, won no-bid contracts in Iraq. Other likely topics include his insistence that Saddam Hussein had ties to the al Qaeda terrorist network and that a Kerry victory would make the nation more vulnerable to a terrorist attack.

Meanwhile, independent candidate Ralph Nader said Sunday that he planned to continue campaigning in key battleground states in the final month of the presidential election.

While preparing for a campaign trip that begins at Harvard on Monday and continues to the swing states of Maine and New Hampshire on Tuesday, Nader said defeating Mr. Bush is a priority, but he's still trying to capture as many votes as possible in November.

"The assumption of all these questions is that I take more votes away from Kerry than Bush. Part of that is in Kerry's hands. He once said he wants to take away my votes by taking away my issues: I'm delivering it to him on a silver platter. He's responsible for that problem," Nader said.