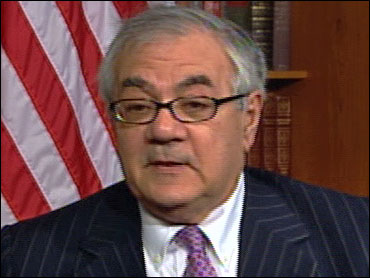 Last spring, Frank helped push a bill through Congress that imposes strict new rules on lenders, including a limitation on when and how banks hike rates. Most of the rules will take effect in mid-February, a date set by Congress to give banks time to prepare for the changes.

But the Massachusetts Democrat, who chairs the House Financial Services Committee, said at a hearing on Thursday that lenders have abused the grace period by using the time to hike rates ahead of the new rules.

"It is very clear that this is the kind of protection that shouldn't wait and we should move forward," Frank said about the new credit card rules.

Frank also said he is open to providing relief to merchants that pay heavy fees to banks in exchange for accepting credit cards from their customers. Thursday's hearing was focused on legislation by Rep. Peter Welch, a Vermont Democrat, that would regulate those fees.

The hearing included testimony from Kathy Miller, a grocery store owner in Elmore, Vt., whose voice cracked with emotion as she described the strain put on her business because of the high fees, known as "interchange," levied by credit card companies.

Some lobbyists have speculated that Frank's sudden interest in the bill is a warning to banks to tone down their opposition to his broader effort to impose new consumer protections. The financial industry has launched a multimillion-dollar effort to try to defeat legislation backed by Frank and President Barack Obama that would create a new federal regulator to police the fine print on such products as credit cards and mortgages.

Banks contend that tougher restrictions and the creation of a new federal regulator will hurt the availability of credit. In an effort to counter the backlash in Congress and elsewhere, some banks have announced they will adopt consumer-friendly policies on their own.

This week Bank of America Corp. pledged not to hike credit card interest rates or fees before February.

Frank called Bank of America's promise "welcome" but added that lenders have otherwise abused the grace period given to them by Congress. Further, he said, the bank's pledge was an indication that credit card companies could be forced to comply with the law sooner than planned.