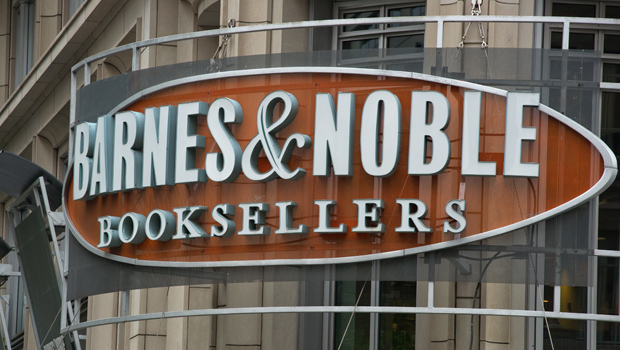 NEW YORK Barnes & Noble (BKS) says it plans to keep making its Nook electronic readers and will focus on offering content to its customers, even as its first-quarter net loss nearly doubled.

The quarterly results came as the struggling bookseller's chairman said he is abandoning his bid for the company's retail stores. Shares tumbled nearly 16 percent in midday trading.

Barnes & Noble is reviewing its strategy in the wake of CEO William Lynch's departure in June and continuing declines in Nook revenue, a unit the company has invested heavily in. In a call with investors, Barnes & Noble Michael Huseby, president of Barnes & Noble and CEO of its Nook business, said the 4-year-old Nook business has had some success, with 10 million devices sold and a 22 percent share in the e-book market. But he said there have been missteps.

"We have faced an increasingly challenging competitive landscape and, as it turned out, we were overly optimistic the past two holiday seasons, forecasting demand for our Nook devices falling far short of our expectations," he said in a call with investors.

In June, Barnes & Noble said it would explore making its color Nook devices with a third-party manufacturer. On Tuesday Huseby elaborated, saying the company continues to design and develop both black-and-white and color Nook devices, with at least one new Nook due out for the holiday season and more products in development. He said the company already works with third-party manufacturers for parts of the device such as screens and microchips, and there are opportunities to expand those relationships.

He declined to give any specifics on a possible partner for the color devices, however, saying "we will report our progress on these issues at the appropriate time."

The company's top priority with Nook, he said, is to target existing Nook customers and increase how much they spend on content for the device.

"We are working on innovative ways to sell content to our existing customers and are exploring new markets we can serve successfully," he said.

Barnes & Noble has been dealing with major changes in the book industry. It faces tough competition from discounters such as Amazon and a shift toward electronic readers.

On Tuesday, former Chairman Leonard Riggio dealt the company another blow, saying he is ending a bid for the company's bookstores.

"While I reserve the right to pursue an offer in the future, I believe it is in the company's best interests to focus on the business at hand," he said in an SEC filing. He added that the company's top priorities should be serving its 10 million Nook customers and accelerating sales of Nook products in stores and elsewhere.

Excluding a non-cash valuation allowance against some deferred tax assets, the loss totaled 86 cents per share. Analysts expected 81 cents per share, according to FactSet.

Revenue at stores open at least one year fell 9.1 percent. The measure is a key retail metric because it excludes volatility from stores that opened or closed during the year. Excluding the Nook, the measure fell 7.2 percent.

Barnes & Noble reaffirmed full-year guidance. It continues to expect revenue in stores open at least one year to fall in the high single digit percentage range at retail stores and the low single digits at college stores.