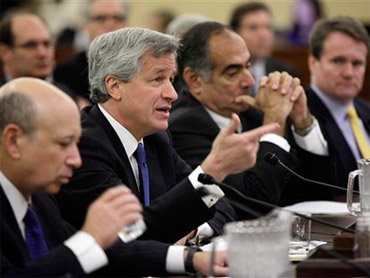 Top bank executives defended their bonus and compensation practices to a special commission investigating the 2008 financial collapse Wednesday, but the head of the panel asserted that risky financial actions led to devastating consequences for American families.

Phil Angelides, chairman of the Financial Crisis Inquiry Commission, told the CEOs of top U.S. banks that Americans are angry and "they have a right to be."

"We'll follow the evidence wherever it leads," Angelides said in his opening remarks Wednesday morning.

Additional Coverage from the EconWatch blog

Angelides, a former Democratic treasurer of California, questioned Goldman Sachs' Lloyd Blankfein about packaging soured assets into bond-like securities and selling them to investors - even as Goldman Sachs was "shorting" the same securities, or making bets they would fail. These included risky mortgages that were extended to borrowers with poor credit records and helped cause the home-loan bust.

"It sounds like selling a car with faulty brakes and then buying an insurance policy on that car," Angelides said.

Responded Blankfein: "I do think the behavior is improper. We regret the consequence that people have lost money in it."

Like the other witnesses, Blankfein acknowledged lapses in judgment in some practices leading up to the crisis.

"Whatever we did, it didn't work out well," he said. "We were going to bed every night with more risk than any responsible manager would want to have."

The four bankers who testified Wednesday represented institutions that collectively received more than $90 billion in direct government assistance from the $700 billion federal bank bailout and availed themselves of billions from the Federal Reserve. Goldman Sachs received an additional $12.9 billion in bailout money that had gone to AIG.

Angelides suggested that blame for the crisis was widespread among the nation's largest financial institutions. "Maybe this is like `Murder on the Orient Express' - Everybody did it," he said, referring to the Agatha Christie murder mystery. The four bankers appeared before the panel for just over three hours before it turned to other witnesses.

At the White House, presidential press secretary Robert Gibbs said that President Obama on Thursday will outline his plan to make sure taxpayers are able to recoup the money they are owed in the bailouts. The president is expected to announce a new fee on the country's biggest financial firms to recover up to $120 billion.

Of the bankers' testimony, Gibbs said, "It would seem to me that apology would be the least of what anybody could expect." He said Wall Street officials need to show common sense.

The witnesses said they supported tighter oversight, but warned against going too far. Congress is considering limiting the size of financial companies or breaking up companies whose failure could collapse the whole financial system.

"The solution is not to cap the size of financial firms. ... We need a regulatory system that provides for even the biggest banks to be allowed to fail, but in a way that does not put taxpayers or the broader economy at risk," Dimon said.

The commission's vice chairman, former Rep. Bill Thomas, R-Calif., said the inquiry would try "to get to the bottom of what happened and explain it in a way that the American people can understand."

Thomas, a former chairman of the tax-writing House Ways and Means Committee, said one important question is, "If you knew then what you do now, what would you have done differently?"

Added John Mack, chairman of Morgan Stanley: "We did eat our cooking and we choked on it."

Dimon said most of his employees took "significant cuts in compensation" in 2008. He said his company would continue to pay people in a "responsible and disciplined manner" to attract and retain top talent.

Mack said the crisis was "a powerful wake-up call for this firm." He said he didn't take a bonus in 2009 and that his bank has overhauled its compensation practices to discourage "excessive risk-taking."

As for how the banks will treat homeowners hurt by the economic downturn, Mack told reporters during a break that "we'll continue to try to keep homeowners in their homes."

They were joined by Bank of America Corp. CEO-President Brian Moynihan, who said compensation levels will be higher next year than they were in 2008, but not at levels before the financial meltdown.

"We understand the anger felt by many citizens," he said. "We are grateful for the taxpayer assistance we have received."

With Bank of America having repaid its bailout money, he said "the vast majority of our employees played no role in the economic crisis" and do not deserve to be penalized with lower compensation.

Stocks , as traders followed unfolding testimony on Capitol Hill about the financial crisis from heads of Wall Street's biggest banks.

During the question-and-answer period of the hearing, Blankfein attempted to compare the effects of his bank's role in the financial risk market to the same risk a city faces against a hurricane, but Angelides stopped him.

"Acts of God we'll exempt," Angelides said. "This was caused by acts of men."

The bank chiefs provided their insight into the causes behind the burst of the housing bubble and the resulting effect it had on the economy as a whole.

"We got caught up in and contributed to elements of froth in the financial market," Blankfein said.

"We didn't know if asset prices would deter any further throughout 2007," said Blankfein. "We weren't certain in hindsight events not only looked predictable or looked as if they were obvious or known. The truth is no one knew what was going to happen."
"We did make mistakes," Dimon said in his opening statement. "There were a number of things we could have done better."

Commissioner John W. Thompson asked the bank chiefs how the inability of regulators and banks to predict the effect such financial innovations as credit-default swaps played into the economy's near-collapse.

"It's the age old problem," Blankfein said. "You don't want to fail to innovate on one hand. On the other hand, you don't want financial innovation to fail."

More than once during his testimony, Dimon laid blame on companies' internal teams, not government regulators.

"I blame the management teams and no one else," Dimon said. "One of the surprising things about all these things, a lot of these problems with mortgages, derivates … they were all known."

At the same time, Dimon also said that public lenders Fannie Mae and Freddie Mac, which had to be completely taken over by the government when the crisis came to a head in 2008, partly contributed to the burst of the housing bubble.

Dimon also talked about how the downturn shouldn't have come as that big of a surprise because the economy experiences ebbs and flows every five to seven years.

"Not to be funny about it, but my daughter asked me when she came home from school 'what's the financial crisis,' and I said, 'Well it's something that happens every five to seven years,''' Dimon said. "We shouldn't be surprised, but we need to do a better job."

Later in the hearing, Blankfein revealed how little he knew in 2007 about the economic crisis.

"I remember being teased at a shareholders meeting in '07 and being asked what inning we were at in the crisis," said Blankfein. "I said we were in the seventh inning of the crisis. As it turned out, we were in the second inning."

A common retirement strategy can erode your savings: watchdog
Thanks for reading CBS NEWS.
Create your free account or log in
for more features.
View CBS News In
CBS News App Open
Chrome Safari Continue
Be the first to know
Get browser notifications for breaking news, live events, and exclusive reporting.