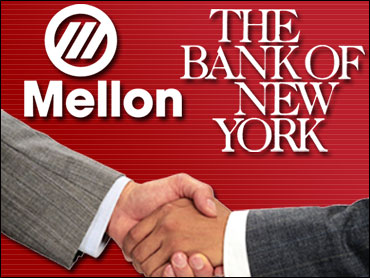 Bank of New York Co. has agreed to take over Mellon Financial Corp. in a $16.5 billion all-stock deal that will create the world's largest securities servicing company and one of the biggest asset managers.

But the companies also said in announcing the deal on Monday that they expect it will result in the elimination of about 3,900 jobs, or nearly 10 percent of their combined work force.

They said the job cuts from a combined work force of about 40,000 would occur in the three years after the deal closes. They said reductions would be made through normal attrition "wherever possible."

The companies expect to cut costs by about $700 million a year and said the deal will result in restructuring charges of about $1.3 billion.

The deal has been approved by each company's board of directors, but requires approval by regulators and shareholders. The companies expect the deal will be completed in the third quarter of next year.

That means Bank of New York shareholders would get about 63 percent of the shares in the new company.

Bank of New York and Mellon have entered into mutual stock option agreements for 19.9 percent of the issuer's outstanding common stock, the announcement said.

In a conference call with reporters, Renyi termed the deal "a transformational merger" and noted that it came amid signs of increased consolidation in the asset management business.

He said the combined company would be the largest securities servicing firm in the world and among the top four asset managers in the United States.

Kelly said the new company would take advantages of the different strengths of the two institutions.

Still, Kelly said, "there will be expense synergies and opportunities for saving money going forward."

He said that the combined company's cash management and stock transfer operations would remain in Pittsburgh.