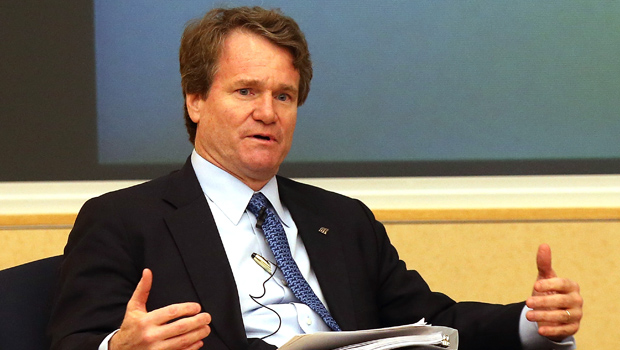 Bank of America (BAC) says chief executive Brian Moynihan received a 2012 compensation package worth $7.4 million, down slightly from the prior year, according to an Associated Press analysis of a regulatory document filed Thursday.

Moynihan became CEO at the start of 2010, after his predecessor Ken Lewis stepped down amid controversy over the acquisitions of Merrill Lynch and Countrywide. Moynihan has been slimming down the bank's operations, including the sale of its international global wealth investment management business and improving its balance sheet last year.

While the bank did not increase any of its top executive's salaries in 2012, it noted in a filing with the Securities and Exchange Commission Thursday that beginning in February, Moynihan's base salary increased to $1.5 million, along with raises for other top executives. Bank of America said the increases reflect market trends, improving financial performance and resolution of several legacy issues the bank faced.

The Associated Press formula calculates an executive's total compensation during the last fiscal year by adding salary, bonuses, perks, above-market interest that the company pays on deferred compensation and the estimated value of stock and stock options awarded during the year. The AP formula does not count changes in the present value of pension benefits. That makes the AP total slightly different in most cases from the total reported by companies to the Securities and Exchange Commission.

The value that a company assigned to an executive's stock and option awards for 2012 was the present value of what the company expected the awards to be worth to the executive over time. Companies use one of several formulas to calculate that value. However, the number is just an estimate, and what an executive ultimately receives will depend on the performance of the company's stock in the years after the awards are granted. Most stock compensation programs require an executive to wait a specified amount of time to receive shares or exercise options.