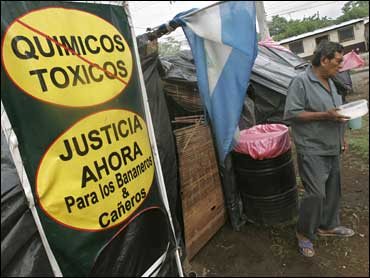 A jury Thursday found that American food giant Dole should pay $2.5 million in punitive damages to five workers who claimed they were made sterile by use of a pesticide on Nicaraguan banana plantations in the 1970s.

Last week, the Superior Court jury awarded $3.3 million in actual damages to six workers, most of it to be paid by California-based Dole Fresh Fruit Co. and the remainder by Dow Chemical Co. of Michigan. The jury's finding that Dole acted maliciously in harming five of the six allowed punitive damages to be considered for the five.

The punitive damages were to be split evenly among the five workers exposed to the pesticide known as DBCP.

Lawyers for both sides called it a win. Duane Miller, the workers' attorney, said it sends a message that multinational corporations such as Dole are accountable for what they do, even overseas.

"This is a tremendous victory for the banana workers who were sterilized by DBCP," Miller said.

Dole attorney Rick McKnight called the verdict a "substantial defeat" for the plaintiffs because the jury did not come back with a much larger award. McKnight said he believed the jury recognized that the Dole of 30 years ago was a very different company than the Dole of today.

"This verdict overall is quite a vindication," he said.

Twelve workers originally filed the lawsuit, but the jury determined that only six had been substantially harmed by the pesticide, DBCP. The six were awarded actual damages ranging from $311,200 to $834,000 each.

The case marked the first time a U.S. jury heard a lawsuit involving sterility and DBCP. Legal experts said the case raised the issue of whether multinational companies should be held accountable in the country where they are based or the countries where they employ workers.

Also sued were Dow and Amvac Chemical Co., manufacturers of the pesticide.

The lawsuit accused Dole of negligence and fraudulent concealment while using DBCP. It alleged the manufacturers knew it could leave workers sterile and concealed that information.

In deciding the earlier actual damages, the jury said Dole would pay the bulk of the award.

Dow was not liable for punitive damages because the judge granted the company's petition to apply Michigan law to the amount and types of damages earlier in the trial. Michael L. Brem, one of the attorneys for the Midland, Mich.-based company, said this would prevent punitive damages and cap any compensatory damages at $394,200 per plaintiff.

During the trial, Dole was accused of improperly applying the pesticide in amounts far exceeding guidelines. The pesticide was used to kill microscopic worms at the roots of banana plants.

McKnight said the pesticide was only applied once or twice a year and that the plants were doused with 56,000 gallons of water for more than an hour afterward. Dole and Dow attorneys said the workers were not exposed to enough DBCP.

The case is the first of five lawsuits involving at least 5,000 agricultural workers from Ecuador, Nicaragua, Costa Rica, Guatemala, Honduras and Panama who claim they were left sterile after being exposed to the pesticide. Other growers and manufacturers are named as defendants in those cases.

A home made from shipping containers
Thanks for reading CBS NEWS.
Create your free account or log in
for more features.
View CBS News In
CBS News App Open
Chrome Safari Continue
Be the first to know
Get browser notifications for breaking news, live events, and exclusive reporting.