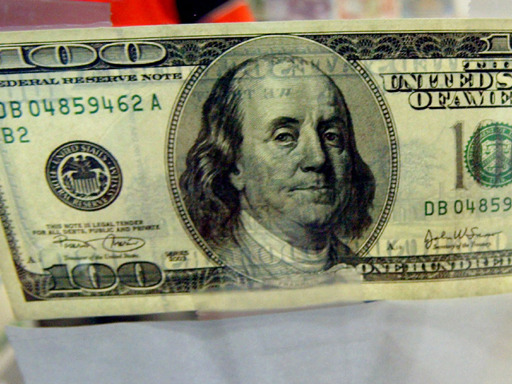 Through no fault of his own, Benjamin Franklin's first name seems to have fallen into disrepute. Here's our contributor Tim Noah:

This is a $100 bill. It's the currency of criminals, kleptocrats, and sociopaths.

Other people may use it, but nobody else needs it. ATMs almost never stock it.

Why does the U.S. Treasury continue to print it?

In this age of credit cards and debit cards, you don't see a lot of C-notes in America. But foreigners love it. Sixty-five percent of all C-notes are held by foreigners overseas.

The hundred-dollar-bill may be America's most successful export. And guess what? Foreigners have fishy reasons for holding onto their Benjamins, too!

Let's review some basics. America's economic bargain with the rest of the world - especially China - goes as follows. They give us automobiles and computers and baby strollers, and we give them dollars, the most stable currency in the world.

Some foreigners, though, would prefer to hang onto paper dollars, because - shhh! - they don't want anybody to know they have American bucks.

Occasionally their motives aren't dishonest. If you live in a corrupt country that's likely to seize your wealth, you might have good reason to hide your C-notes from the authorities.

But most foreign Benjamins, it seems a fair guess, are in the hands of not-very-nice people. Dictators, drug lords, warlords, oligarchs, terrorists.

The U.S. recently redesigned the C-note to make life harder for counterfeiters operating in North Korea and elsewhere.

Well, if the C-note ceased to be available to foreign criminals and dictators, another paper currency would have to take its place. The leading candidate would be the 500 euro note. For its admirable compactness, criminals have nicknamed it "the Bin Laden." Indeed, should the U.S. stop making $100 bills, the Bin Laden could easily become the preferred currency of America's criminal class.

But surely, if we banned our Benjamins, the Europeans could be shamed into banning their Bin Ladens. They don't want to help criminals and terrorists any more than we do.

It's happened before: Back in 1969, the U.S. government started worrying about the sketchy doings of people who trafficked in $500 bills. You know what it did? It stopped making them!