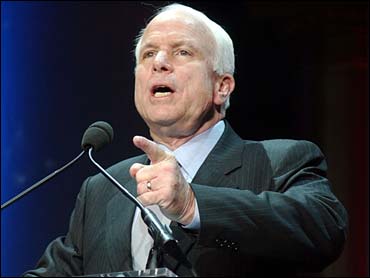 Sen. John McCain was in Norfolk on Wednesday for a rally and announcement of a new coalition in support of Sen. George Allen's campaign.

During the event, however, McCain made a joke about a monkey flying an airplane, the Hampton Roads Daily Press reports. This comment came as Allen fights criticism for having called opponent Jim Webb's campaign worker "macaca," which is a genus of monkey.

The fallout from Allen's name-calling of a Webb campaign staffer overshadowed the event. McCain says that having made several gaffes over the years, Allen has his deep and abiding sympathy. But McCain predicted Allen "will get back on track quickly."

The two possible 2008 GOP presidential nominees announced "Veterans for Allen" — a coalition led by Paul Galanti, who was campaign coordinator for McCain's primary bid against President Bush in 2000. The senator from Arizona and Galanti were both prisoners of war in Vietnam.

Allen's opponent, Jim Webb, is a decorated Marine veteran of the Vietnam War and former Navy secretary under President Reagan.

About 125 Allen supporters attended the hour-long rally, in which Allen defended his support of President Bush's Iraq policy.