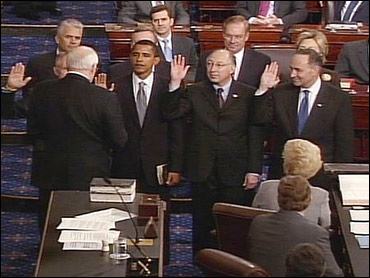 The 109th U.S. Congress convened Tuesday with prayers for victims of the Asian tsunami and the swearing-in of new members, after House Republicans retreated on efforts to weaken ethics rules.

Rep. Dennis Hastert, R-Ill., was re-elected as House speaker, becoming only the second Republican in history, after Joseph Cannon, to serve four consecutive terms in the job.

Majority Republicans in both houses are expected to push hard for President Bush's ambitious second-term agenda, including plans to reform Social Security, simplify the tax code and cap awards for medical malpractice lawsuits.

Senate Republicans are also expecting a battle with Democrats over Mr. Bush's nominations to federal judgeships.

House Republicans sidestepped what could have been a bruising opening-day fight with Democrats by deciding, at a closed-door meeting Monday night, to reverse course on several measures that could have made it harder to punish members for ethical transgressions.

GOP leaders stressed that they didn't want the ethics issue to sidetrack their greater legislative goals.

"It would have been the right thing to do, but it was becoming a distraction," said John Feehery, spokesman for Hastert, referring to a relaxation in ethics rules — including one that would make it more difficult to rebuke members whose misconduct doesn't reach the level of specific rule or law violations.

Republicans come into the new session after picking up four seats in the Senate, to reach 55. They will command 232 of the 435 House seats, an increase of three.

After swearing in 41 new members and other housekeeping measures, the House was taking up the GOP-proposed rules changes, which, despite the modifications made by Republicans, are likely to generate Democratic protests.

The proposals will make it harder to proceed with an ethics investigation by requiring a majority vote of the evenly divided ethics committee. The current system allows an investigation to begin automatically if there is no action within 45 days.

At least one prominent Republican, outgoing ethics committee chairman Joel Hefley, R-Col., voiced concerns about the rules changes because "ethics reform must be bipartisan and this package is not bipartisan."

Among other provisions of the package, lawmakers and their staff would be able to take a relative along on lobbyist-financed trips. Currently, they can be accompanied only by a spouse or child.

Another provision would expand the authority of the committee that oversees homeland security issues, a move that was strongly backed by the Sept. 11 Commission, which complained that too many committees in Congress have jurisdiction over security matters.

But the likelihood of a bitter fight over ethics was largely averted when DeLay and Hastert made two startling announcements at the beginning of the GOP meeting.

First DeLay asked Republicans to overturn the party rule, enacted last November on his behalf, that allows party heads to retain their posts even if indicted. Three of DeLay's Texas associates have been indicted by a grand jury in Austin on fund-raising violation charges.

DeLay's spokesman, Jonathan Grella, said DeLay was confident that he would not be indicted, and decided to seek the elimination of the rule protecting him because he didn't want to give Democrats an issue.

Secondly, Hastert withdrew a proposal that would have made it tougher to rebuke a member of the House for misconduct. Here too the dispute revolved around DeLay.

The ethics panel, while saying the DeLay broke no rule or law, has criticized him in the past year for his tactics in trying to win the vote of a colleague, for giving the impression of a link between donations and support for legislation, and for his office's contact with federal aviation officials, seeking their intervention in a Texas political dispute.

The code of conduct that was retained by the Republicans requires lawmakers and employees to conduct themselves "at all times in a manner that shall reflect creditably on the House." Some Republicans believed the standard is too general and wanted any discipline to depend on a more specific finding of wrongdoing.

Brendan Daly, spokesman for Rep. Nancy Pelosi of California, the Democratic leader, said Republicans pulled back on the discipline rule because "the issue simply became too hot for them to handle."