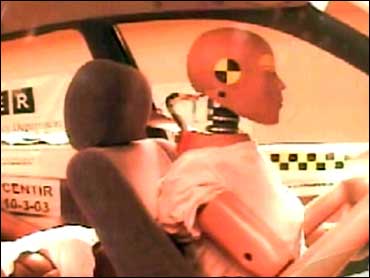 An occupant of a motor vehicle is killed every 13 minutes and injured every nine seconds in collisions, according to the latest research on seat belt use in America.

The Early Show Medical Correspondent Dr. Emily Senay says the study highlights the need for every passenger in a vehicle to buckle up for safety.

It's no secret that safety belts are effective in reducing injuries and deaths due to car crashes. Although most drivers and front seat passengers now make it a habit to wear a seat belt, America still have a ways to go in getting back seat passengers to buckle up.

The latest study from the Center for Transportation Injury Research shows that during a head-on collision, an unbelted back-seat passenger becomes a "back seat bullet," slamming into the driver and significantly increasing both the passenger's and driver's risk of dying. The study found the odds of dying for belted drivers in head-on crashes more than doubles with an unbelted rear-seat passenger.

Researchers measured a dramatic fourfold increase in force to the head and chest of the driver when passenger seated directly behind the driver was unbelted.

Senay says when a person in the back wears a seat belt, it's a much safer story. The researchers estimated that with a rear seat belt usage rate of 95 percent, more than 800 lives would be saved and more than 65,000 injuries would be prevented in this country each year.

The risk of death in a car crash is lowest if all occupants wear seat belts. Senay says drivers should make sure everyone in the car is wearing a seat belt.

Other occupants in a car are at risk from an unbelted passenger besides the driver. Research in the Journal of the American Medical Association showed it doesn't matter where in the vehicle a person sits -- if they're not wearing a seatbelt, it puts the other occupants at risk.

A person can be killed if struck by another occupant who is catapulted forward, backward, or sideways in a crash. A person in the front without a seat belt might be hurled against a person in the rear seat, especially when the impact is from the rear. Also, people sitting side by side can easily hit each other if one is not belted.

Less than one-third of states require adults sitting in the back seat to wear seat belts. Senay says it's up to the individual to make sure everyone's safe.

And, don't forget to get kids to buckle up, too, or use a safety seat if they're smaller.