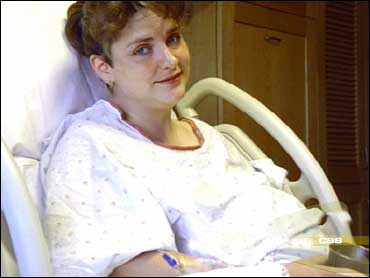 Three months ago, Paula Maestas died while she was in labor with her second child, and then came back to life.

While in the delivery room at St. Joseph's Hospital in Denver, Colo., Paula developed amniotic fluid embolus, a rare and dangerous condition. In 90 percent of cases, people die. Only 1 percent of women who survive are neurologically intact.

Totally recovered now, Paula, her husband and one of her doctors spoke about the experience Tuesday on The Early Show.

At 2:10 in the afternoon, Paula's breathing began to fail. A nurse happened to be in the room and called for emergency back-up. Doctors rushed in, started CPR and put a tube down her throat to get her to breathe. It wouldn't work - so they knew then it was an amniotic fluid embolus.

"Wow. Very scary. Intense. A lot of people scrambling to figure out what was going on at first, and then to try and save her," recalls Paula's husband, Richard. "That's my worst nightmare right there, to lose both of them, all in the same day."

Richard hit the floor when the doctors began CPR. The doctors initially thought he had fainted. But Richard was praying.

"I was going down on one knee. I didn't know -- I was helpless. All I could do was pray. They thought I was fainting. I said,'No. I'm OK. I'm just praying.' But you know, I'm thankful that I have God and that I can -- I have that strength, because in and of myself, there was nothing else I could have done," he says.

The medical team started a Caesarean section after her first symptoms, to get the baby out as quickly as possible. The whole procedure took six minutes.

"While they were doing that, they were actually doing CPR and pumping on Paula's chest to keep her alive while trying to get the baby out. They were then able to shock her again and get her back," says Dr. Kevin Miller.

Richard was told to let go of her hand so they could administer the electric shock to revive her.

Paula's heart kept stopping throughout the day - and the doctors had her prepped to be on a heart-lung machine. Within 30 seconds of the time she was going to be transferred to this machine, her heart started to normalize.

In the course of four hours, Paula was given 60 blood unit transfusions. She had six anesthesiologists and four cardiologists by her bedside on the first night.

The baby was given a 50/50 chance of survival and was transferred to the neonatal unit. Doctors told her afterwards the baby did not breathe for one minute.

Paula was in a coma for 24 hours in the intensive care unit. A nurse asked her if she was in pain, and she shook her head "Yes." It was the first sign that Paula was OK.

Three months later, Paula is doing fine. "I feel great, yeah. I don't have any after-effects," she says.

Paula says she views what happened as a true miracle, and learned that God will always be there for her and her family.

Her husband agrees. He also offers his thanks to the medical team at St. Joseph's. "I wish there was another word, higher up, that would do justice. Thank you just doesn't do it.

"They gave me back my family," he says. "Ultimately, God did it, but they were very quick to act. Within 10 seconds there must have been 30 or 40 people initially in the room and then all along the way, there was that many people, if not more, just taking care of everything that needed to be taken care of."

Paula is back in business. She has her own insurance business and works part time.