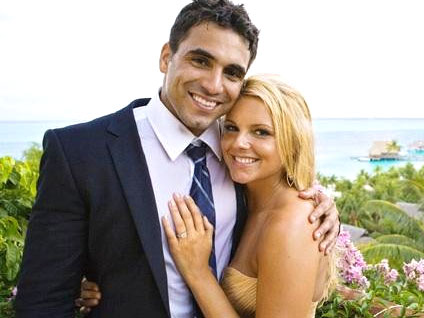 (CBS) Bells are in the air for "Bachelorette" Ali Fedotosky and Roberto Martinez.

The pair is now making plans for a 2011 wedding after almost tying the knot in Vegas this month after watching fellow "Bachelor" couple Jason and Molly Mesnick renew their vows during the city's Rock and Roll Half Marathon.

The theme will be "very light and airy," Fedotosky told Us Magazine.

And what designer will the bride-to-be be wearing? She's considering having Monique Lhuillier design her gown. But the shoes are another story.

"I definitely need to have comfortable shoes," she told the magazine. "That's the most important."

Bridesmaids will mostly likely be wearing yellow dresses, she said. "My sister, his sister definitely" will be in the bridal party, US reports. "And then I have a couple good friends in my life. I definitely have some in mind."

Don't expect an overly glitzy affair, the reality star said. Fedotsky's is looking to avoid some of the pitfalls of big weddings. "I've been looking at a lot of wedding things and I'm always like, 'that looks tacky,'" she said in the article. "I kind of want to make it a little different."

But the engagement ring Martinez gave her is anything but understated. He presented Fedotosky her with a Neil Lane rock that's over three carats surrounded with 184 diamonds. It's estimated price tag: $50,000.

So maybe after shelling out dough like that, it's prudent to think small for the big day.