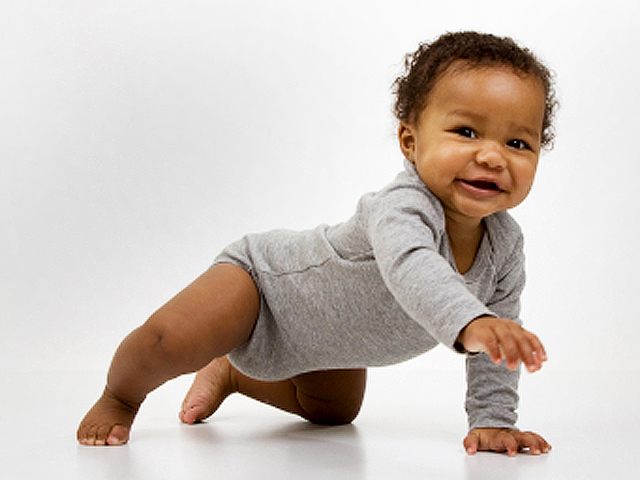 (CBS/AP) Before they can talk, are babies trying to figure out what people are saying to them? A new study suggests babies read people's lips when they learn to speak.

In that magical stage when a baby's babbling gradually changes from gibberish into syllables - and eventually into that first "mama" or "dada" - babies move their gaze from eyes to mouths, the study shows.

"The baby, in order to imitate you, has to figure out how to shape their lips to make that particular sound they're hearing," explains developmental psychologist and study author David Lewkowicz of Florida Atlantic University. "It's an incredibly complex process."

For the study, Lewkowicz and doctoral student Amy Hansen-Tift tested nearly 180 babies at ages 4, 6, 8, 10 and 12 months by showing videos of a woman speaking in English or Spanish to the babies. All the babies were born to English-speaking parents. A gadget mounted on a soft headband tracked where each baby was focusing his or her gaze and for how long.

The researchers found a dramatic shift in attention: When the speaker used English, the 4-month-olds gazed mostly into her eyes. The 6-month-olds spent equal amounts of time looking at the eyes and the mouth. The 8- and 10-month-olds studied mostly the mouth. At 12 months, attention started shifting back toward the speaker's eyes.

What happened when these babies accustomed to English heard Spanish? The 12-month-olds studied the mouth longer, just like younger babies. They needed the extra information to decipher the unfamiliar sounds.

That fits with research into bilingualism that shows babies' brains fine-tune themselves to start distinguishing the sounds of their native language over other languages in the first year of life. That's one reason it's easier for babies to become bilingual than older children or adults.

The new research appears in this week's issue of the Proceedings of the National Academy of Sciences. It offers more evidence that quality face-time with your tot is very important for speech development - more than, say, turning on the latest baby DVD.

"It's a pretty intriguing finding," says University of Iowa psychology professor Bob McMurray, who also studies speech development. The babies "know what they need to know about, and they're able to deploy their attention to what's important at that point in development."

Researchers have yet to determine whether babies with developmental disorders, including autism, learn to speak the same way - or if they show differences that might be early warning signs. Scientists also want to learn how to encourage language learning, especially if it doesn't happen on time.

Previous studies have focused more on what babies hear. Scientists know the famous sing-song speech that parents intuitively use attracts babies' attention, and the rhythm exaggerates key sounds. Other studies have shown that babies who are best at distinguishing between vowel sounds like "ah" and "ee" shortly before their first birthday wind up with better vocabularies and pre-reading skills by kindergarten.

But scientists have long known that babies also look to speakers' faces for important social cues about what they're hearing. Eyes convey important nonverbal messages, namely emotion, connected to words.

Babies are so hard to study that this is "a fairly heroic data set," says Duke University cognitive neuroscientist Greg Appelbaum, who found the research so compelling that he wants to know more.

Appelbaum said the study raised more questions that need further examination. Are the babies who start to shift their gaze back to the eyes a bit earlier better learners, or just more impatient? What happens when learning a foreign language after 12 months?