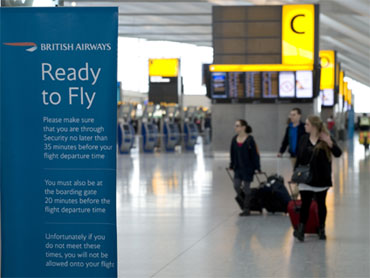 British Airways cabin crews walked off the job for a second day Sunday, upsetting travel plans for scores of customers, but the airline said its contingency plans were working well and more planes were taking off than expected.

The airline - locked in a bitter dispute with workers over a pay freeze and changing working conditions - said it was able to add several extra flights because many crew members ignored the three-day strike call.

"Our contingency plans are continuing to work well on Sunday morning around the world," it said in a statement.

BA said all long-haul aircraft from overseas airports were able to arrive in London as planned on Sunday morning. The airline added there has been no evidence of strikes at any overseas airports directed at its flights.

BA said almost all cabin crew at Gatwick airport and about half of those normally working at Heathrow, the airline's London hub, reported to duty Saturday. It also said that it managed to reinstate more than a dozen of the canceled flights - including those to Miami and Los Angeles, as well as other short-haul European destinations.

Union leaders, however, dispute those claims. Unite, the union representing BA cabin crew, said scores of BA planes were grounded and that 10,000 members walked out on Saturday.

BA was able to avoid extended chaos because it had been re-training its staffers to serve as cabin crew and leasing planes and crew from rival carriers to take up some of the shortfall.

Still, about 1,100 flights out of the 1,950 BA flights scheduled to operate during the three-day walkout were expected to be canceled.

The airline had said at the start of the strike that it could handle 49,000 passengers a day on both Saturday and Sunday - about 65 percent of the average 75,000 for a normal weekend day in March. The airline on Sunday declined to provide details of whether that goal was achieved or discuss the number of flights canceled or delayed.

The acrimony with its workers will be crippling for BA's finances and reputation. Unite was planning a second, four-day walkout due to begin March 27, and it had said more strikes will be scheduled after April 14 if the dispute is not resolved. The union has pledged not to walk out over the busy Easter period.

Union joint general secretary Tony Woodley said he was calling on the board and chairman of BA to intervene and resolve the dispute.

"Today, I will be appealing to British Airways at board level to take matters in hand and restart negotiations to reach an agreement which would allow the strike scheduled for next weekend to be averted and put your airline on the road to recovery," Woodley said in a letter to union members.

Analysts estimated the dispute could cost the airline more than the £63 million ($95 million) that Chief Executive Willie Walsh is trying to save through the changes to workers' pay and conditions.

BA argues that the disputed changes - including a pay freeze in 2010, a switch to part-time work for 3,000 staff and a reduction in cabin crew sizes from 15 to 14 on long-haul flights from Heathrow - are critical for its survival. The union argues it was not properly consulted on the changes.