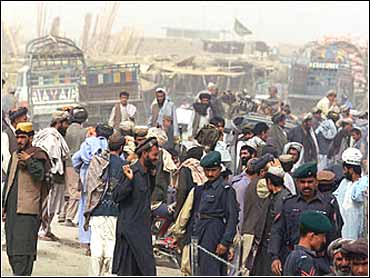 Only a trickle of Afghan refugees -- mostly women, young children and elderly men -- is reaching Pakistan, but aid agencies are bracing for a possible refugee flood, U.N. officials said Monday.

"What we are trying to do here is to get prepared for a potential massive influx of refugees, in the magnitude of 1 million in Pakistan and the magnitude of half a million in Iran, and another 200,000 in the northern countries -- that is, Turkmenistan, Uzbekistan and Tajikistan," Dr. Olivier Brasseur said in a telephone news conference from Peshawar, Pakistan.

Brasseur, a United Nations Population Fund (UNFPA) representative responsible for coordinating refugee relief, said the 1,000 or 1,500 Afghans who reach the relative safety of camps in Pakistan each day are in such poor health that it is a daunting indicator of life inside Afghanistan.

"Those women who manage to cross the border ... are totally exhausted," he said. "They are suffering from starvation, anemia and infection, for they have not received any care for a long time. What we see at the border gives an idea of the health status inside Afghanistan."

The population fund has called for $4.5 million in emergency relief for Afghan refugees since the Sept. 11 hijack attacks on the World Trade Center and the Pentagon. The attacks and subsequent U.S.-led military strikes on Afghanistan have sent millions in Afghanistan heading for the borders.

Click here to learn more about the refugee crisis.
However, Brasseur said most countries surrounding Afghanistan, including Pakistan, have closed their borders to Afghan refugees, citing national security concerns. And he said it was impossible for relief agencies from outside the region, including his, to function inside Afghanistan.

"For us, UNFPA in Pakistan, it is getting increasingly difficult to provide support inside Afghanistan through private channels," he said. "We manage not more than a drop in an ocean of misery."

The population fund is concerned chiefly with the reproductive health of women, aiming to help with prenatal and obstetric care and to stem the spread of sexually transmitted disease.

In an attempt to open corridors of relief, U.N. humanitarian chief Kenzo Oshima is visiting Afghanistan's three northern neighbors this week in a stepped-up effort to bring desperately needed aid into that country before winter arrives.

"The situation inside Afghanistan continues to deteriorate," said Carolyn McAskie, Oshima's deputy. "We're getting about 50 percent of our needs into the country at this stage."

Oshima has received a "very positive response" from the government of Turkmenistan during his current visit to the capital Ashgabat, McAskie said Monday.

But the major test will come in his next stop in Uzbekistan where the order has been closed, she said. Oshima, she said, is going "with very high hope."

Oshima's central Asian tour will end in Tajikistan which also has closed its border to Afghan refugees. But Russia has started providing humanitarian aid via Tajikistan for displaced Afghans in the north.

Afghanistan's ruling Taliban, believed by the United States to be harboring Saudi-born fugitive Osama bin Laden, have restricted women's movements, requiring all to stay in their homes unless accompanied by a close male relative, forbidding them to work or go to school.

With one of the highest fertility rates in the world -- an average of nearly six children born per woman -- Afghanistan also has one of the lowest rates of attended births. Its maternal mortality rate of 17 deaths per 1,000 women is the world's second-highest.

The United Nations estimates that there are some 5.7 million women of child-bearing age in Afghanistan, and of those, 1.1 million are pregnant and 20,000 will need medical coverage in the next 12 months for miscarriage or other serious obstetric and gynecological problems.

Pam DeLargy, senior coordinator of the fund's response to the Afghanistan crisis, said even the simplest supplies can make a life-saving difference. She mentioned a rudimentary delivery kit, including a plastic sheet for the woman to lie on, a clean razor to cut the umbilical cord and string to tie it off.

"This isn't rocket science, these are very basic supplies, DeLargy said on the telephone conference from New York.

"I think that once areas ... in the north are more secure for the northern alliance from the Taliban, it will be increasingly easier to send supplies in through the central Asian republics," Oakley said on the telephone conference.