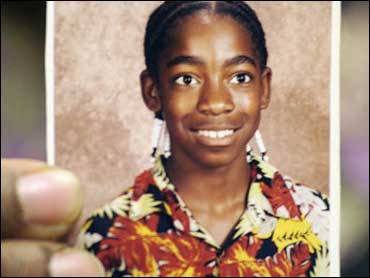 A 14-year-old boy kicked and punched by guards at a juvenile boot camp died because the sheriff's officials suffocated him, a medical examiner said Friday, contradicting a colleague who blamed the death on a usually benign blood disorder.

"Martin Anderson's death was caused by suffocation due to actions of the guards at the boot camp," said Dr. Vernard Adams, who conducted the second autopsy.

Adams said the suffocation was caused by hands blocking the boy's mouth, as well as the "forced inhalation of ammonia fumes" that caused his vocal cords to spasm, blocking his upper airway. The guards had said in an incident report that they used ammonia capsules to keep Anderson conscious.

The autopsy report draws no conclusions about whether Anderson's death was a homicide or an accident.

Anderson had been sent to the boot camp for violating probation by trespassing at a school after he and his cousins were charged with stealing their grandmother's car from a church parking lot.

The county sheriff's office said Anderson was restrained after he became uncooperative. But the camp also admitted that mistakes were made, CBS News correspondent Jim Acosta reported.

He collapsed while doing push-ups, sit-ups, running laps and other exercises that were part of his admission process at the camp. The sheriff's office said force was used on Anderson because he was uncooperative.

Martin Lee Anderson's body was exhumed after a camp surveillance videotape surfaced showing the guards roughing him up Jan. 5, a day before he died. His family had questioned the initial finding by Dr. Charles Siebert, the Bay County medical examiner, that the boy died of complications of sickle cell trait.

Anderson's parents, Gina Jones and Robert Anderson, said the new autopsy findings vindicated their campaign for a thorough investigation of the boy's death.

"All you do bad, the good will come out. And so the truth is out now," Jones said.

The death sparked protests last month at the state Capitol, forced lawmakers to scrap the military-style camps and led to the resignation of the state's top law enforcement officer, who started the boot camp in Panama City when he was Bay County sheriff.

"I am disturbed by Dr. Adams' findings and consider the actions of the Bay County boot camp guards deplorable," said Gov. Jeb Bush, who ordered the investigation that led to the second autopsy.

He later said he didn't think he could suspend Siebert because he wasn't sure if the entire autopsy report was finished. But Attorney General Charlie Crist said that Siebert "should probably be suspended pending further review" and that there "probably will be arrests."

Siebert said Friday that he stands by his findings. If Anderson had suffocated, he said, there would have been higher levels of carbon dioxide in the boy's body.

"I came to my conclusion by valid means," Siebert said. "I've seen no explanation as to how (Adams) came to his conclusion."

Marc Tochterman, a spokesman for the Bay County Sheriff's Office, which operated the boot camp, said the agency had no immediate comment.

Waylon Graham, attorney for sheriff's Lt. Charles Helms, who was second in command of the boot camp and present in the exercise yard that day, said the investigation has turned into a "witch hunt." He said Helms doesn't believe that the guards caused Anderson's death.