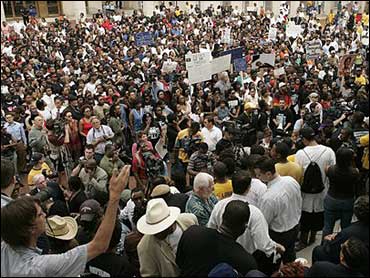 About 1,500 students marched with the Revs. Jesse Jackson and Al Sharpton on Friday to protest how the state has handled the death of a black teenager who was punched and kicked by guards at a juvenile detention boot camp.

Martin Lee Anderson, 14, was the third young black male to die in state custody in the past three years. His death in January came a day after black and white guards were videotaped kicking, dragging and kneeing him. A medical examiner found the death was caused by complications from sickle cell trait, a usually benign blood disorder.

Friday's protest came a day after the state's top law enforcement officer resigned amid criticism over his handling of the case and a joke that Gov. Jeb Bush called "inappropriate."

The Miami Herald reported that Guy Tunnell compared Sen. Barack Obama to al Qaeda leader Osama bin Laden and Jackson to the outlaw Jesse James at a meeting of department heads. The newspaper cited one unnamed source who was at the meeting and another who had spoken to a department head who was there.

Bush said he couldn't confirm details of the joke because he wasn't at the meeting.

"He made a joke that was inappropriate," Bush said. "He apologized to Lt. Gov. (Toni) Jennings. I don't know exactly what he said. It's important that the agency which is a critically important agency for people to have confidence, move forward. I thought it was appropriate to move on."

Sharpton said the march was about the death of Anderson, "not because somebody called us names."

College students held pictures of Anderson and his funeral casket and sang "justice delayed is justice denied" and "this is what democracy looks like."

Sharpton and Jackson held hands with his parents, Gina Jones and Robert Anderson, as they silently walked toward the Capitol. Jones cried when she saw the pictures.

Anderson's parents, the student protesters and the Legislature's black caucus dispute the official autopsy findings and have called on Bush to revoke the examiner's license. The parents also are seeking the results of a second autopsy, conducted after they had the boy's body exhumed.

Tunnell, commissioner of the state Department of Law Enforcement, started the Panama City boot camp when he was Bay County's sheriff. His agency was investigating the death until it was taken off the case by a special prosecutor appointed by Bush.

During the investigation, Tunnell had forwarded e-mails to the present sheriff that criticized those who questioned the effectiveness of the boot camp concept.

Bush said he did not ask Tunnell to step down.

"I think it was probably a cumulative thing, to be honest with you," Bush said. "The e-mail question as it related in the matter of this young child was inappropriate. He recognized that, and it put the agency in a difficult situation."