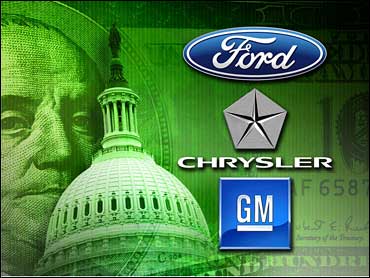 A $14 billion rescue package for the nation's imperiled auto industry sped to approval in the U.S. House Wednesday night, but the emergency bailout was still in jeopardy from Republicans who were setting out roadblocks in the Senate.

Democrats and the Bush White House hoped for a Senate vote as early as Thursday and enactment by week's end. They argued that the loans authorized by the measure were needed to stave off disaster for the auto industry - and a crushing further blow to the reeling national economy.

The legislation, approved 237-170 by the House, would provide money within days to cash-starved General Motors Corp. and Chrysler LLC. Ford Motor Co., which has said it has enough to stay afloat, would also be eligible for federal aid.

Republicans were preparing a strong fight against the aid plan in the Senate, not only taking on the Democrats but standing in open revolt against their party's lame-duck president on the measure.

The Republicans want to force the companies into bankruptcy or mandate hefty concessions from autoworkers and creditors as a condition of any federal aid. They also oppose an environmental mandate that House Democrats insisted on including in the measure.

The White House, though not formally endorsing an agreement with congressional Democrats, dispatched administration officials to Capitol Hill to make a case for the rescue package. During a contentious, closed-door luncheon with Senate Republicans, they got an earful of criticism from the rank-and-file, some of whom have already announced plans to block the measure.

"They got a good dose," said opponent Tom Coburn, R-Okla., as he emerged from the session.

The plan would create a government "car czar," to be named by President George W. Bush to dole out the loans, with the power to force the carmakers into bankruptcy next spring if they didn't cut quick deals with labor unions, creditors and others to restructure their businesses and become viable.

Detroit desperately needs an overnight sensation - but the industry, which must sell 15 million autos a year to be profitable, is on pace to sell only 11 million, reports CBS News correspondent Anthony Mason.

Auto analyst Kevin Tynan says the plans the automakers put on the table are not enough to return them to long-term profitability and viability.

"They've done a lot of work in the product portfolio. But still more needs to be done. And it needs to be accelerated," Tynan told Mason.

Congressional Republicans, left out of negotiations on the package, blasted it. Their opposition reflected the tricky task of enacting yet another federal rescue in a bailout-weary Congress, with Bush's influence on the wane.

"People realize that this bill is an incredibly weak bill, (and) is the product of an administration that wants to kick the can down the road and let somebody else deal with it," said Sen. Bob Corker, R-Tenn. "I think it has minimal - very little support in our caucus."

The scene so far has been somewhat reminiscent of the tense atmosphere of early October on Capitol Hill, when lawmakers argued, cajoled, threatened and lobbied one another, ultimately passing a $700 billion bailout plan that Bush signed into law for Wall Street financial firms.

With Republicans balking and many senators absent from the emergency, postelection debate, mustering the 60 votes needed to advance the measure in the Senate was proving tricky.

Opponents in the Senate say taxpayer money should not be spent up front before the industry is forced to make changes, reports CBS News correspondent Bob Orr.

"Isn't that putting the cart before the horse? Isn't that, to use a common phrase, just ass-backwards?' said Se. David Vitter, R-La.

Sen. Mitch McConnell, the GOP leader, said Wednesday afternoon that his side had only recently gotten a copy of the measure. He said, "Everybody is still kind of poring through it, trying to figure out exactly what it does. But everybody understands the significance of the issue and the enormity of the problem."

Democratic Sen. Max Baucus of Montana announced he was against the measure because of a provision to bail out transit agencies. The bus and rail systems could be on the hook for billions of dollars in payments because exotic deals they entered into with investors - which have since been declared unlawful tax shelters - have gone sour.

At the White House, too, Deputy Chief of Staff Joel Kaplan told reporters at a late-morning briefing that the administration had yet to read the fine print of its "conceptual agreement" with congressional Democrats.

"We have not seen final text of legislation that we have agreed to," he said

However, he indicated clear support, saying Bush would personally lobby Republicans and was dispatching Chief of Staff Josh Bolten to Capitol Hill to make the case.

Rep. John A. Boehner, R-Ohio, the minority leader, said the legislation unveiled Wednesday "asks taxpayers to further subsidize a business model that is failing to meet the needs of American workers and consumers."

Under the bill the carmakers would have to submit blueprints on March 31 to the industry overseer showing how they would restructure to ensure their survival, although they could be given until the end of May to negotiate with the government on a final agreement.

A breakthrough came when Democrats agreed to scrap language - which the White House had called a "poison pill" - that would have forced the carmakers to drop lawsuits challenging tough emissions limits in California and other states, said congressional aides.

There was still heartburn among Republicans, however, over language that would force the automakers to abide by those states' limits. Democrats insisted on it as a kind of consolation prize for environmentalists, who already were livid that the measure would draw the emergency loans from an existing program to help carmakers retool their factories to make greener cars.

Kaplan said the Bush administration would work with President-elect Barack Obama's team on choosing the so-called "car czar," acknowledging that Bush's tenure ends soon and the automakers' woes will continue well into 2009.

Mr. Obama defended the auto bailout as necessary given the threat a potential Big Three collapse could pose to an already battered economy.

"As messy as it may be, I think there's a sense of, 'Let's stabilize the patient,"' he said in an interview published in Wednesday's Chicago Tribune and Los Angeles Times.

The car czar would have say-so over any major business decisions by the automakers while they were taking advantage of federal aid, with veto power over any transaction of $100 million or more. The companies - including the private equity firm Cerberus, which owns a majority stake in Chrysler - would have to open their books to the government overseer.

And if Chrysler defaulted on its loan, Cerberus would be responsible for reimbursing the government.

The measure would attach an array of conditions to the bailout money, including some of the same restrictions imposed on banks as part of the $700 billion Wall Street rescue. Among them are limits on executive compensation, a prohibition on paying dividends and requirements that the government share in future profits and taxpayers be repaid before any other shareholders.

Also included in the bill is an unrelated pay-raise for federal judges.