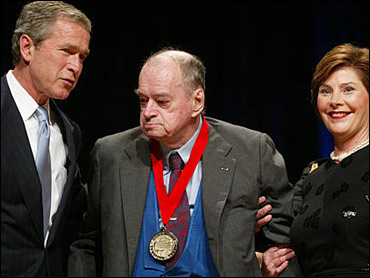 William Manchester, author of popular biographies on Winston Churchill and Douglas MacArthur and the chronicler of President Kennedy's assassination, died Tuesday. He was 82.

Manchester had been in poor health and had recently suffered two strokes. He died early Tuesday at his home, said Bill Holder, spokesman at Wesleyan University, where Manchester was a professor emeritus.

His health problems had kept his from completing the third volume of his best-selling Churchill series, "The Last Lion." Paul Reid, a feature writer at The Palm Beach Post, was recently chosen to help finish the book.

Manchester emerged from a working-class childhood in industrial Massachusetts and battlefield experiences as a Marine Corps sergeant in World War II to write about 20th century giants such as Kennedy, Churchill, MacArthur and the Rockefellers.

Although known as an accomplished, readable biographer, historian and author of more than a dozen books, Manchester probably was best known for his relationship with the Kennedy family.

Manchester and Kennedy became friends in 1946 while both were recovering from debilitating war wounds. During the 1950s and the "Camelot" years, Manchester was a confidant and companion to Kennedy, and a frequent visitor to the family's Hyannis Port complex.

The friendship helped provide Manchester with material for his breakthrough book — the 1962 "Portrait of a President," the first of three books that he wrote about the late president. The shattering experience of the Kennedy assassination the following year and the exhaustive, controversial investigation led to "The Death of a President," published in 1967.