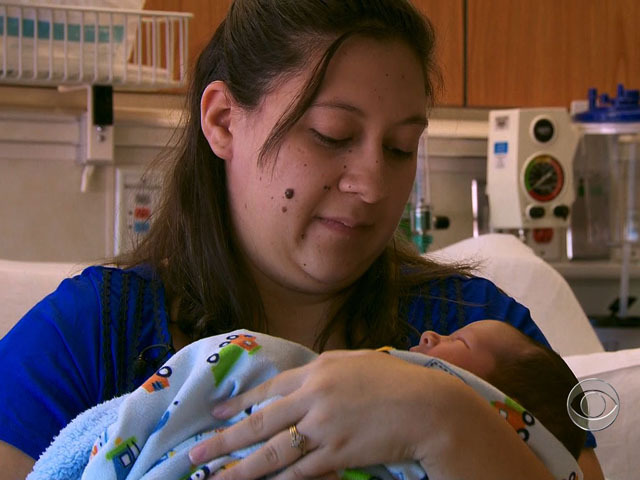 (CBS News) AURORA, Colo. - Among those in the theater during the Colorado massacre were Caleb Medley and his wife Katie. Caleb suffered a serious brain injury but Katie gave birth to a healthy boy. We had a chance to visit with mother and child.

Just two days old, Hugo Medley is being called the miracle baby of the theater shooting. He's a source of hope for his mother Katie.

"He really does, he looks just like his dad," she said.

His father, Caleb, was shot in the eye.

Hugo was born Tuesday in the same hospital where Caleb remains heavily sedated in intensive care.

"He was in surgery," said Katie of Caleb. "He was having brain surgery while I was in labor. It was crazy."

After the birth, Katie -- along with baby Hugo -- was able to visit Caleb in the ICU. "We were the a matter of hours. They let us put him with Caleb and everything, which was really nice."

During the visit, Hugo "cried a little bit, which we were hoping for because we wanted Caleb to hear him cry," Katie said. "But other than that, he just laid there. He's such a content baby. I don't know where he gets that from."

Katie was unsure about how she was able to stay strong. "I think because I was at the point where I thought my husband was dead, that coming back from that is what gives me strength -- that he's alive and the fact that he's fighting so hard to get to us is what's making me strong."

She thinks it was crazy about what happened to Caleb at the movie theater. "There were so many people in that theater, it's like, 'How did he end up as one?'"

Caleb doesn't have health insurance. A website set up to help the family has raised more than $300,000.

"I'm so amazed by so many people who are doing this for us and I don't know how to thank them. I'm just so thankful. We're just so blessed. I just don't even know what to say. We're just very blessed."

Katie and baby Hugo are no longer patients. But the hospital is letting them stay so they can be close to Caleb.

For information on how to help Caleb Medley and his family, visit calebmedley.com/help.