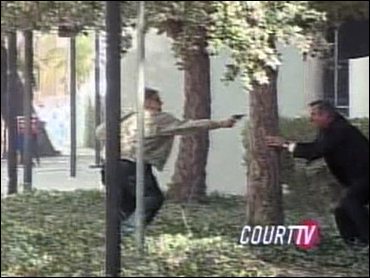 A lawyer who survived a gunman's attack that was captured on videotape said he hadn't met the suspect before the assault and feels fortunate to be alive.

Gerry Curry, 53, was released Sunday from a hospital after being shot at close range by a man identified by police as William Strier, 64. Curry was shot in his arm and neck.

"It's weird. It's the kind of thing that always happens to someone else," Curry said. "This is the thing you see on TV, but this time it happened to me. But the main thing is that I survived, so I'm very grateful."

After the attack, Curry staggered from behind the tree, blood on his face, and held up his hands before collapsing.

Strier, having emptied his gun, walked off. Cameramen following him pointed to him to alert police. An off-duty sheriff's reserve officer tackled Strier, and other officers soon pounced on him, reports CBS News Correspondent Hattie Kaufman.

Strier was arrested, booked for investigation of attempted murder and was being held on $1 million bail. He was scheduled to appear in court Tuesday.
With scars on his face and his arm in a sling, Curry told reporters that he had never met Strier before, but had heard about prior threats.

"A man walked up to me and said 'Are you Mr. Curry?' and I said, 'Yes, who are you?' and then he just shot me," Curry said. "I didn't even see the gun. I heard a pop and I knew I'd been shot because the blood spattered up in my face."

Court documents show Strier was involved in a dispute in which he alleged a trustee appointed by the court to manage his trust fund was withholding money he needed for medical care. The fund was established with money Strier received in an injury settlement.

Curry represented the trustee in the dispute with Strier. Curry claims that "when things weren't going the way (Strier) wanted them to, then he called (the trustee) up and threatened to kill her."

The wounded lawyer was shot five times in his right arm, where doctors told him there was some muscle, tendon and nerve damage. He also had a bullet lodged in the back of his neck.