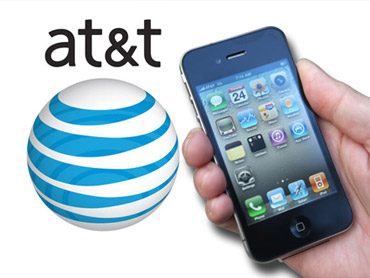 AT&T Inc. sold a record number of iPhones in the latest quarter, continuing to siphon subscribers from other wireless carriers in a tightening industry.

The iPhone 4 went on sale on June 24, just before the start of the quarter. Apple's worldwide sales figures, reported Monday, had already shown the device to be a blockbuster hit, despite early complaints about reception problems.

AT&T is the exclusive U.S. carrier for the iPhone, but news reports have said Verizon Wireless is getting it early next year. The companies haven't confirmed that. If that is the case, AT&T is in the last quarters of loading up on high-paying iPhone customers before it has to share the phone. Sanford Bernstein analyst Craig Moffett described the iPhone sales as an "inoculation" against losing exclusivity.

Across all types of phones, AT&T added a net 745,000 subscribers on contract-based plans, matching analyst expectations. That's much less than it has in previous years, but still strong considering growth in the industry has stalled now that nearly everyone has a phone. AT&T ended the quarter with 92.8 million wireless subscribers.

Helped by the iPhone, AT&T is taking a lead in moving people from "dumb" phones to smarter ones. Chief Financial Officer Rick Lindner said 80 percent of the phones activated in the quarter were "smart" or texting-oriented, the highest figure ever for the company.

However, there doesn't seem to be a big pot of gold waiting for phone companies that get people on to smart phones. It does help the companies compensate for a decline in the price of phone calls, but it comes with heavy costs in the form of subsidies for the phones and in network investment to support data users.

AT&T pays hundreds of dollars in subsidies for each new smart phone. The Dallas-based company makes those back through monthly fees over the run of two-year contract, but the launch of a new iPhone model in the summer reliably holds back AT&T's third-quarter earnings.

Excluding a gain on a tax settlement and the effects of the sale of a subsidiary, AT&T's income was 55 cents a share, up 3.8 percent from a year ago, despite having 14 percent more wireless subscribers and getting higher fees out of its smart phone subscribers each month. The earnings matched Wall Street expectations.

Revenue climbed 3 percent to $31.58 billion from $30.7 billion a year ago. Analysts were expecting revenue of $31.25 billion, according to a poll by Thomson Reuters.

AT&T continued to take the lead in adding non-phone devices such as e-readers and GPS units to its wireless network. It added 1.16 million such devices in the quarter. That figure excludes Apple's iPad tablets, for which AT&T is also the exclusive U.S. carrier.

On the wireline side, which accounts for nearly half of AT&T's revenue, results have been on a long slide as consumers give up their landlines in favor of relying on their cell phones or phone service from cable companies.

For the quarter, AT&T touted a slight increase in wireline consumer revenues, the first such gain in more than two years. That's due to U-Verse, a cable-TV-like service it offers in some areas where it's upgraded its phone network.

AT&T is the first major telecommunications company to report results for the quarter. Verizon Communications Inc. weighs in on Friday morning.