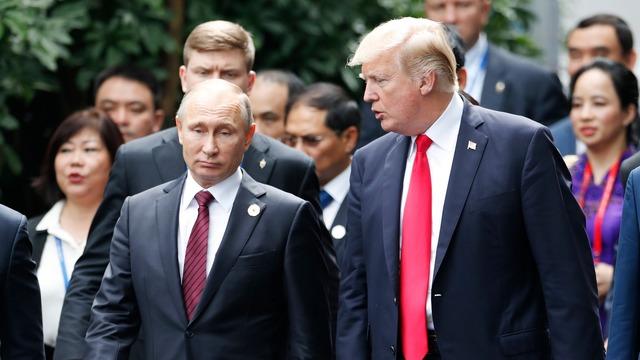 A centerpiece of the upcoming Helsinki summit between President Trump and Russian President Vladimir Putin will be the future of Syria and a proposal to enlist Russia as a partner in ousting Iran from that battlefield. In an appearance on CBS News' "Face the Nation," National Security Adviser Ambassador John Bolton said the July 16 meeting would be "just the two of them" and would offer the chance to discuss Syria at length, along with "a whole range of issues."

Bolton also signaled that the U.S. has dropped its rhetorical opposition to dictator Bashar al Assad, who has held onto power in Syria through a mix of brutal tactics such as chemical weapons, and the firepower of Russian and Iranian forces, including Hezbollah.

"I don't think Assad is the strategic issue. I think Iran is the strategic issue," Bolton said. Two Arab diplomats and a senior U.S. official told CBS News that the administration has now accepted that Assad will remain in power for the immediate future and has decided to focus on convincing Putin to sever ties with his battlefield partner Iran.

"There are possibilities for doing a larger negotiation on helping to get Iranian forces out of Syria and back into Iran which would be a significant step forward," Bolton told "Face the Nation."

A senior U.S. official told CBS News that the set agenda with Putin includes an extended one-on-one meeting with Mr. Trump, which has heightened concern among some U.S. officials regarding any concessions that may be made when the two are in the room together. When asked by CBS News how many translators would be in the room or whether Bolton would join the meeting at some point, a National Security Council spokesperson said there were no details to announce.

"Nobody knows what Trump will do once he's in the room with Putin," the senior official said. "This is on just about every issue."

Several members of the president's national security team had cautioned against meeting with Putin after what is expected to be a tense summit with NATO partners the prior week. European officials told CBS News that the optics of a bad meeting with U.S. allies followed by a warm summit with Putin would only allow Russia to exploit cracks in that alliance. U.S. officials are also concerned that it will heighten the risk of cutting a bad deal with Putin in Syria.

It is not clear that Russia has the leverage or ability to push out Iran, which has served as Assad's main patron through the war, now in its seventh year. The U.S. does have its own leverage through a limited military presence of about 2,000 troops on the ground in Syria to assist local forces in the fight against ISIS. However, President Trump has stated that he does not want to keep those troops in Syria.

While his national security team has urged him to maintain the U.S. troop presence, some U.S. national security officials are concerned that the president may be willing to make them part of the negotiation with Putin. An Arab diplomat told CBS News that Russia specifically wants the U.S. to give up its base of operations in al Tanf, Syria.

According to a report in the Wall Street Journal, Bolton personally objected to giving up the al Tanf presence in part because it is situated in the middle of a route that Iran would like to use to shuttle weapons and supplies to Hezbollah in Lebanon. It is not clear exactly President Trump himself stands on the issue.

The potential deal in Syria is being justified on the grounds of a counterterrorism mission which is a top priority for President Trump.

"I think the Russians are always saying to us they want to cooperate on international terrorism," Bolton said and pointed to Iran as a major sponsor of it.

Yet the idea of brokering a new deal with Russia is happening at the very same time that Putin is violating the 2017 agreement that he personally brokered with Trump to halt attacks inside a so-called de—escalation zone in southern Syria.

The Trump administration has decided not to take any military action to stop the Russian assault on the zone which had originally been serving as a haven for refugees and formerly U.S.-backed rebels. Jordan, already home to 1.3 million Syrian refugees, and neighboring Israel have both shut their borders to refugees fleeing the violence.

Asked if breaking that deal should prevent the U.S. from brokering a new one, Bolton channeled the non-committal Trumpian language, saying, "Well, we'll see what happens when the two of them get together."