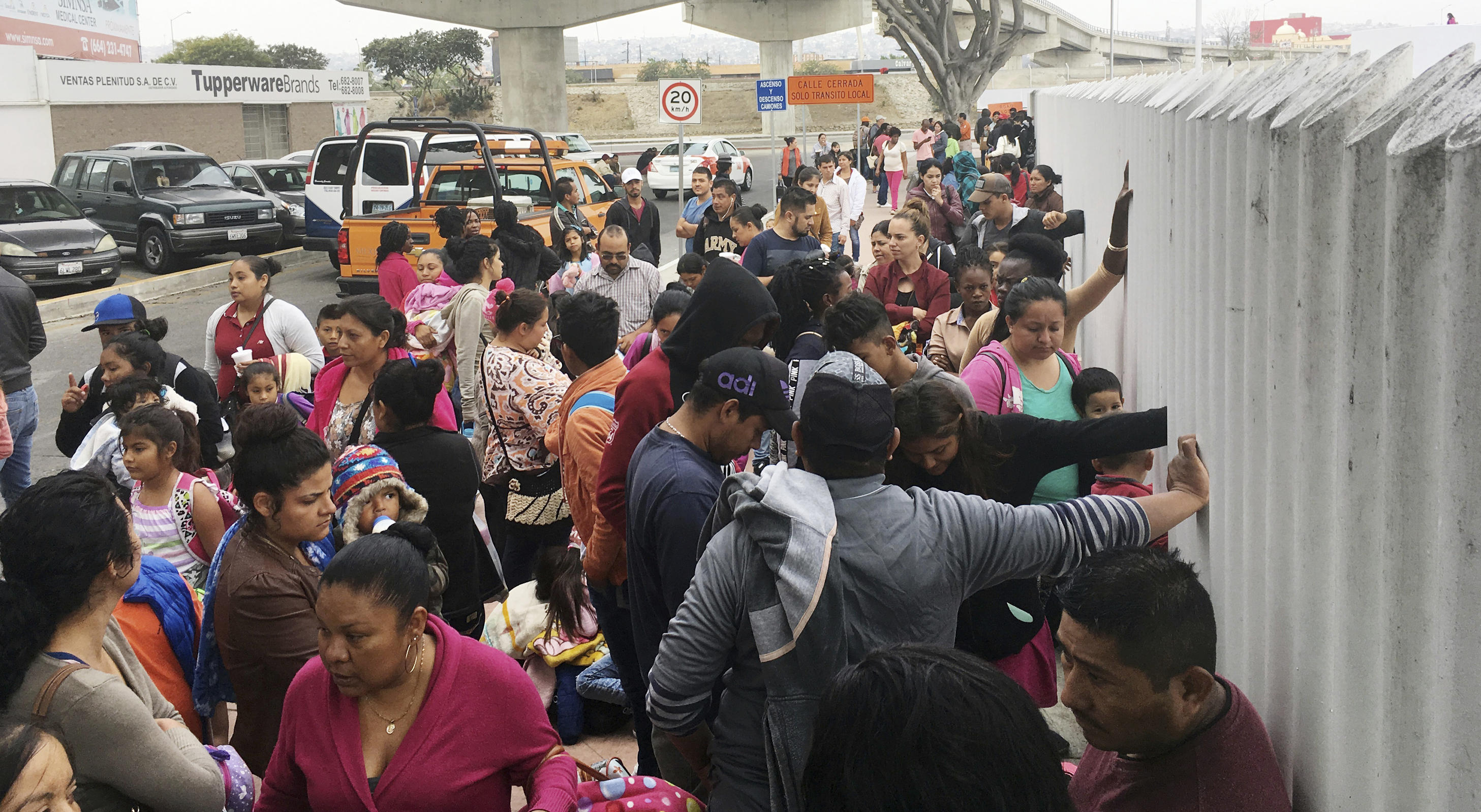 TIJUANA, Mexico -- The Trump administration's tough talk on immigration did not deter Telma Ramirez from making the trip from El Salvador to seek asylum in the United States. She arrived at the border in Tijuana with her 5-year-old son and 1-year-old daughter only to find a crush of other immigrant asylum-seekers already in line ahead of them.

The 27-year-old mother had been checking in at the Mexican entrance to the border crossing to see if civilian volunteers were close to calling their numbers, reminiscent of a host station at a crowded restaurant. Finally, on the 20th day, Ramirez made it to the front of the line to come across the border.

Lines at border crossings in California, Texas and Arizona are so busy with asylum seekers that some have to wait days, even weeks, to present themselves to U.S. border inspectors.

At the Hidalgo, Texas, border crossing, parents and children sleep on cardboard on a bridge separating the two countries, waiting for U.S. authorities to signal their time has come, according to volunteers bringing them food and water. Some wait several days in sweltering heat.

Lawyers say asylum seekers at the Nogales, Arizona, crossing are camping out up for five days to make a claim.

Across from San Diego, more than 100 asylum seekers gathered Monday in a large plaza at the Tijuana side of the nation's busiest border crossing, alongside taxis dropping off kids who cross the border for school and vendors selling oatmeal, tamales, burritos and smoothies from carts. Families whose numbers aren't called return to Tijuana migrant shelters to idly pass the time with their children.

Volunteer Carlos Salio tells them the wait is about three weeks.

"You have to come here every day," Ramirez said. "If not you, lose your place in line."

Salio consults his tattered notebook of people who left their names with him, calling them out when their turn comes. When U.S. authorities said 50 would be allowed to claim asylum that day, Salio encouraged people to go back to their shelters.

"Everyone knows that when your number is close, you better be here," he tells the crowd, many of them women with young children.

The exact reasons for the border crossing bottleneck are unclear.

It comes amid the Trump administration's new "zero-tolerance" policy to prosecute every immigrant arrested for illegal entry, setting off an uproar among critics because it is causing immigrant parents to be separated from their children. Asylum seekers who turn themselves in to border inspectors do not face such a fate, with rare exceptions.

U.S. Customs and Border Protection said in a statement that any waits in Mexico are expected to be temporary. The number of people the agency can take depends on detention space, complexity of cases, translation requirement, medical needs, traffic at the crossing, ongoing enforcement actions and available resources, the statement said.

It is not uncommon for asylum seekers to have a wait a short time. A caravan of Central Americans who caught President Donald Trump's attention waited nearly a week. The waits have not reached levels of 2016, when thousands of Haitians overwhelmed U.S. border inspectors in San Diego and had to wait up to five weeks.

Federal law and international treaties require the U.S. to consider if people should be granted asylum for fear of persecuted back home on grounds of race, religion, nationality or political affiliation. To Trump administration officials and their allies, the system is rife with fraud and meritless claims.

The administration has become more outspoken about wanting to close "loopholes" that officials say lead to frivolous claims. They want to raise the standard for passing an initial screening and overturn laws and court rulings that make it easier for families to be released while their claims wind through immigration court.

Jill Bussey, a lawyer with the Catholic Legal Immigration Network, said she met one family from Guatemala camped out in the heat on the Mexican side of the border crossing connecting to Nogales, sleeping on the hard concrete outside the station.

"They tell people all the time, 'Get in line and wait,'" Bussey said. "These people are in line, and they're waiting."

In Texas' Rio Grande Valley, the busiest corridor for border crossings, people have been seen waiting on the bridge at Hidalgo, Texas, for at least two weeks, according to witnesses and news reports. One volunteer, Esperanza Chandler, said Friday that families have been told by U.S. authorities that they have to wait because there's no room to process them.

"Where they are, the sun hits them all day long," Chandler said. "They're under a little bit of covering, but the concrete and that whole area is very, very hot."

Another volunteer visited the bridge Sunday with a group that brought umbrellas to provide some shade.

To keep order in Tijuana, activists created a system in which asylum seekers who show up at the crossing give their names, ages and hometowns. They are assigned a numbers, ensuring that people who arrived after them won't jump ahead.

Mexicans dominated the list of asylum seekers waiting to cross in San Diego, with large numbers of Central Americans.

Blanca Estela Garcia, 31, said she fled the violent Mexican state of Michoacan because a neighbor had been kidnapped and she received an anonymous death threat by phone. She didn't know where she would go with her husband and children ages 14, 8 and 1, if they are allowed into the United States.

"The important thing is not to go back," she said.

After spending her first night in Tijuana on concrete outside the border crossing, she got a number and planned to look for shelter for the next few weeks.