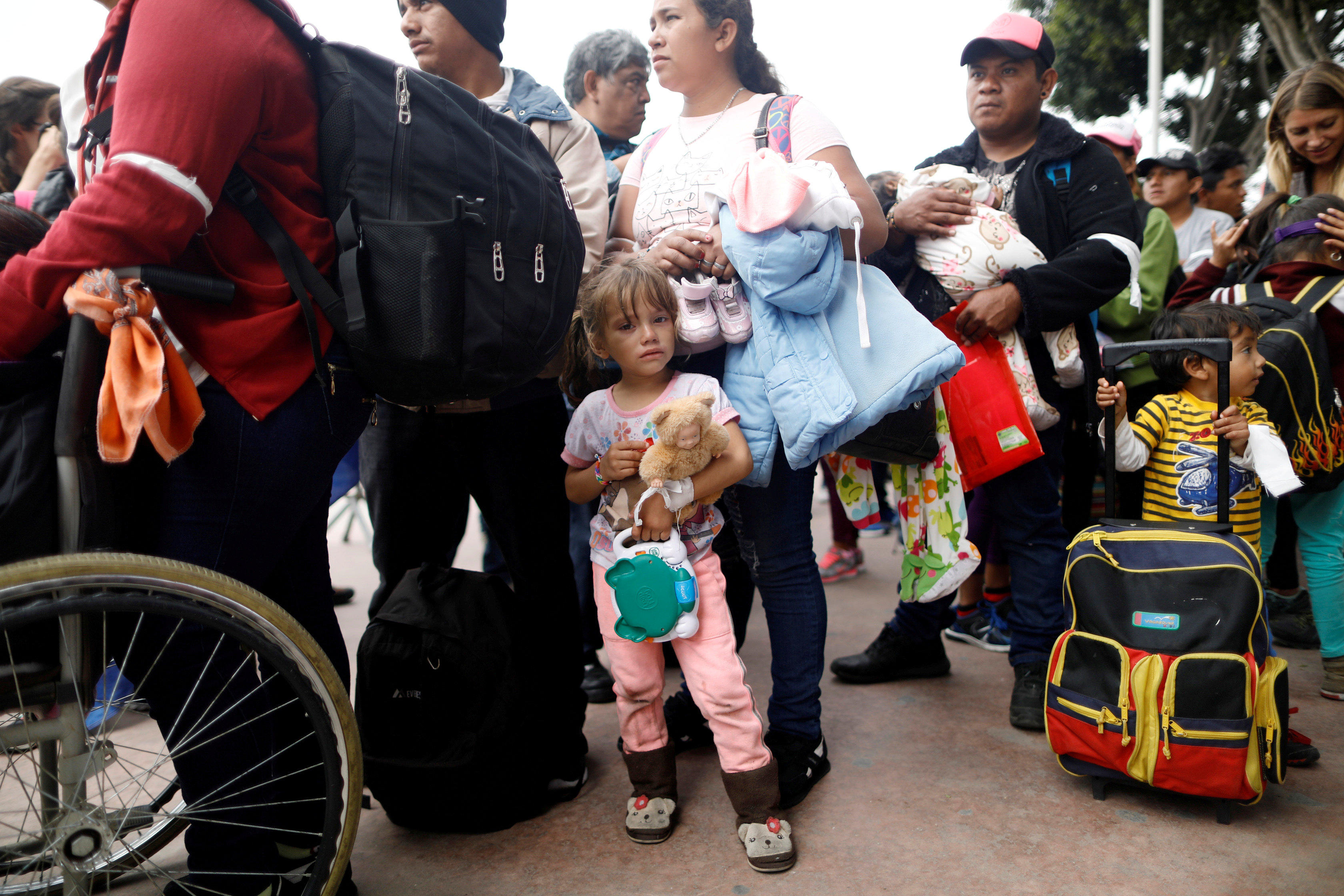 TIJUANA, Mexico -- After traveling through Mexico with great fanfare for a month under the Trump administration's watchful eye, nearly 200 Central American migrants intending to seek political asylum in the United States were stopped in their tracks when border inspectors said a crossing facility didn't have enough space to accommodate them.

President Trump vowed last week to "stop" the caravan while Cabinet members said they would deliver a swift response. The asylum seekers held firm, setting up a possible showdown.

In an anticlimactic twist, about 50 asylum seekers were allowed past a gate controlled by Mexican officials to walk across a long bridge but were stopped at the entrance to the U.S. inspection facility at the other end. They were allowed to wait outside the building, technically on Mexican soil, without word of when U.S. officials would let them claim asylum.

Another 50 or so camped on blankets and backpacks in Tijuana, outside the Mexican side of the crossing, prohibited from even getting close to the U.S. inspection building.

The asylum-seekers began the day with anticipation, traveling in red-and-white school buses under police escort to a beachfront rally in Tijuana, where a steel fence juts out into the Pacific Ocean. They sang the Honduran national anthem, and supporters on the San Diego side of the fence waved a Honduran flag.

After a final briefing from lawyers and minutes before they were to begin a short walk to the border crossing, U.S. Customs and Border Protection Commissioner Kevin McAleenan announced that the San Ysidro border crossing, the nation's busiest, had "reached capacity" for people without legal documents and that asylum-seekers may need to wait in Mexico temporarily.

Mr. Trump has commented frequently on the caravan since it started in Mexico on March 25 near the Guatemala border and headed north to Tijuana. His broadsides came as his administration vowed to end what officials call "legal loopholes" and "catch-and-release" policies that allow people requesting asylum to be released from custody into the U.S. while their claims make their way through the courts, which can take years.

Attorney General Jeff Sessions has called the caravan "a deliberate attempt to undermine our laws and overwhelm our system." Homeland Security Secretary Kirstjen Nielsen said asylum claims will be resolved "efficiently and expeditiously" and warned that anyone making false claims could be prosecuted.

The administration's stern warnings left organizers in disbelief that border inspectors weren't ready for them.

"They have been well aware that a caravan is going to arrive at the border," Nicole Ramos, an attorney working on behalf of caravan members, said at a news conference. "The failure to prepare and failure to get sufficient agents and resources is not the fault of the most vulnerable among us. We can build a base in Iraq in under a week. We can't process 200 refugees. I don't believe it."

The San Ysidro border inspection facility can hold about 300 people, according to Pete Flores, Customs and Border Protection's San Diego field office director, suggesting the bottleneck may be short-lived. The agency processed about 8,000 asylum cases from October through February, or about 50 a day.

Asylum-seekers are typically held for up to three days at the border and then turned over to U.S. Immigration and Customs Enforcement. If they pass an asylum officer's initial screening, they may be detained or released into the U.S. with ankle monitors.

Asylum seekers didn't appear to be thrown off the by the delay.

Wendi Yaneri Garcia said she was confident she will be released while her asylum case is pending because she is traveling alone with her 2-year-old son, who has been sick. She said that police in her hometown of Atlantida, Honduras, jailed her for protesting construction of a hydroelectric plant and that she received death threats after being released.

"All I want is a place where I can work and raise my son," the 36-year-old said.

Elin Orrellana, a 23-year-old pregnant woman from El Salvador, said she is fleeing the violent MS-13 street gang, a favorite target of both Sessions and Mr. Trump because of their brutal killings in communities in the United States. She said her older sister had been killed by the gang in El Salvador, so she is attempting to join other family members in the Kansas City area.

"Fighting on is worth it," she said as she camped out for chilly night outside the border crossing.

Heather Crone, of advocacy group Show Up for Racial Justice, said she's found 80 people across the U.S. who agreed to sponsor caravan members if they're released while their petitions are pending.

U.S. immigration lawyers told the asylum-seekers they face possible separation from their children and detention for many months, and said they want to prepare them for the worst possible outcome.

"We are the bearers of horrible news," Los Angeles lawyer Nora Phillips said during a break from legal workshops for the migrants at three Tijuana locations where about 20 lawyers gave free information and advice. "That's what good attorneys are for."