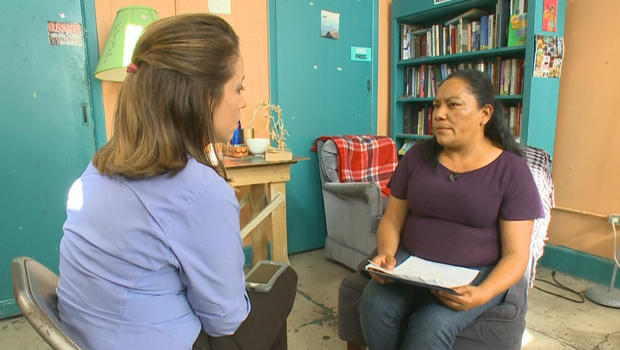 The Trump administration says it is still separating a small number of immigrant children from adults. The action is reportedly taken when parental relationships cannot be confirmed, or if the adult is deemed to pose a threat to the child's safety.

CBS News correspondent Mireya Villarreal, reporting from Tornillo, Texas, spoke to a Mexican grandmother who says her granddaughter was taken away, even though she is her legal guardian.

Last week Villarreal interviewed Angelica and three-year-old Sophia, just before they crossed the border seeking asylum. Angelica was worried Sophia might be taken away, even though she is the only mother the little girl has ever known.

Angelica told "CBS This Morning" she does not know where her three-year-old granddaughter Sophia is, ever since they were separated by immigration officials on Friday – this despite having papers proving that she is Sophia's legal guardian.  Angelica said she was told the documents don't matter.

Ruben Garcia, who runs the Annunciation House in El Paso, which provides shelter and legal assistance to immigrants, is helping Angelica and other separated families.

On Sunday, Annunciation House took in 32 immigrant parents after federal authorities withdrew criminal charges for illegal entry. The parents were separated from their children, and do not know where they are.

The Department of Homeland Security says there is a process to "ensure family members know the location of their children." There is a 1-800 number, and an email providing information. Homeland Security also says the reunification process is "well-coordinated."

But Garcia says it is not: "The system is set up that, once you take the child from the parent, the parent then is presumed to potentially not be adequate to regain their child."

Garcia also says immigrants at the Annunciation House have not found the 1-800 number to be helpful.

It's also unclear if parents detained by the government have access to e-mail or the ability to call the 1-800 number for information about their child.

Angelica says immigration officials told her it will be days before she gets any information on Sophia's whereabouts.

When asked what the hardest part of this ordeal has been, she replied, "Being away from her, separated."

The official told her that Sophia would be in a place that was safe and secure, "but there is nothing like being with family."