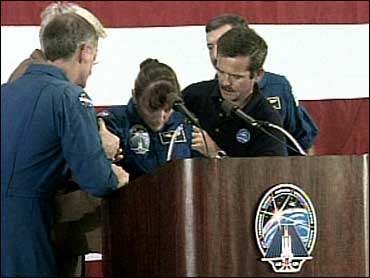 An astronaut from the space shuttle Atlantis collapsed twice Friday during a welcome home ceremony, a wobbly return that officials attributed to the adjustment from 12 days at zero gravity.

Heidemarie Stefanyshyn-Piper left the hangar at Ellington Field through a side door but was not taken to a hospital, officials said.

Piper, fifth of the six astronauts to speak, appeared to be confused before her legs buckled during her address. NASA officials and crew members braced her and lowered her to the ground. She stood up again, and the crowd applauded.

"Boy, if that's not a little embarrassing," she said.

After speaking for another half-minute or so, she again appeared confused and gripped the podium. Crew members stepped to her side and lowered her to the floor.

It is believed her "light-headedness" was a simple physical reaction to her getting readjusted to being back on Earth. It is not uncommon for returning astronauts to experience this kind of problem, reports Harwood.

The Atlantis crew returned Thursday after performing the first construction work on the international space station since the Columbia disaster 3 1/2 years ago.

They performed three grueling spacewalks to hook up a 17 1/2 ton addition, which included a giant set of electricity-producing solar panels.

Piper, a 43-year-old from St. Paul, Minn., is a commander in the Navy and was a mission specialist and cosmic electrician aboard the shuttle. She carried out two of the spacewalks, joining an elite club of only six other U.S. women and a single Russian woman who have made spacewalks.

Piper graduated with a bachelor's degree and a master's degree in mechanical engineering from MIT. She received her commission from MIT's Navy ROTC program in 1985 and became a diving and salvage officer. She became an astronaut in 1996 and has waited a decade for her first trip to space.

She's married with one child.

Glenn Piper, her husband, said in a telephone interview from his home in Houston that his wife was fine. "She's doing 100 percent well," he said. "Basically, she's embarrassed."

Glenn Piper, who was at the ceremony, said his wife's collapse was caused by a combination of effects from her recent return, a relatively warm hangar and the excitement of the ceremony. He said the flight surgeons who cared for her knew what was wrong and had seen it happen before.

"She obviously should have stayed seated the first time," he said.