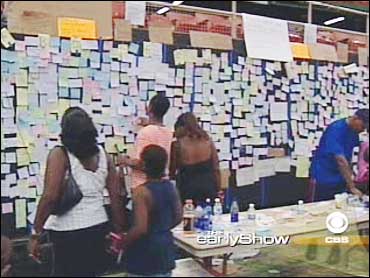 The state of Texas is filling up with evacuees from Hurricane Katrina. Already the state has 56 shelters open and continues looking for places to house the newly homeless.

There are only about 2,000 people left inside the Louisiana Superdome. Evacuations were halted early Saturday and the people left behind could be stuck at the Superdome until Sunday, according to the Texas Air National Guard.

Two more giant shelters were opened after the Astrodome filled to capacity. Houston Mayor Bill White says all conventions in the city are canceled in the weeks ahead, to allow an exhibition hall and convention center to hold evacuees.

Texas Governor Rick Perry says the state could wind up with as many as 200,000 storm survivors.

Elsewhere, officials from as far away as Utah, West Virginia, Wyoming and Michigan are agreeing to help. They're scouting out various facilities, including military barracks and empty shopping malls, to turn into shelters.

Ten buses from Washington are heading for New Orleans, to pick up 400 hurricane people left homeless by Hurricane Katrina. City officials are hoping the buses will return by Labor Day, when the evacuees will be housed at the D.C. Armory.

Meanwhile, one hurricane evacuee died and many others were injured when a bus carrying them from the Superdome overturned and rolled across a highway median in Opelousas, La. At least 10 people were taken to hospitals, several critically injured, The Daily World of Opelousas reported on its Web site.

Some airlines are expected to announce they'll send planes to evacuate thousands of people stranded in New Orleans -- and have the government pay for the flights.

Buses were temporarily turned away from the Houston Astrodome because of safety and crowd concerns.

"By the time we got here it was all filled up. We have to find somewhere else to go," Sherri Jeannmarie told CBS News Correspondent Trish Regan.

Regan reports that nearly everyone in the Astrodome has a story of a loved one missing -- many of them children. Judie Brown was looking for her granddaughter but was heartened Friday by her luck in finding another grandchild.

Houston Mayor Bill White says, "We see the tragedy which is ongoing in New Orleans, and we are doing the best we can to make sure when people get to Houston they have a decent place to stay," White said.

Evacuees could be in Houston for months at a time, he said, and the city was devising a plan to help people over the long haul.

After opening large shelters in Houston, Dallas and San Antonio to accommodate 75,000 evacuees, Texas may tap places such as Austin and Temple to make room for more, said Kathy Walt, a spokeswoman for Gov. Rick Perry.

The state also looked at ways to move people into more permanent housing as thousands of Louisiana residents became temporary Texans or decided to move here for good.

"We don't know how to estimate how many of those people will continue to arrive," Walt said. "They don't have a home to go to right now. We're looking at moving them into housing that is more permanent in nature than a transitional shelter."

A day after Perry made a disaster declaration for Texas, President Bush on Friday declared an emergency in Texas. That means federal funding will be available to Texas and all 254 counties to assist with evacuation aid.

One option state officials are exploring for the long term is possibly moving thousands of evacuees into 7,200 vacant apartments identified east of Interstate 35, Walt said. If approved by the federal government, evacuees would be able to use vouchers from the Federal Emergency Management Agency for the apartments.

When the Astrodome filled, Katrina refugees who had finally arrived by bus were left in limbo for more than two hours before they were redirected to the exhibit hall.

The change only added to the frustration of victims like Patricia Profit, who had relatives already inside the stadium.

"Before we left New Orleans, they said everybody will be in the Astrodome," said Profit as she stood outside one of the buses. "'Don't panic, don't worry, you'll still be with your family. 'That's what they told us. Now we can't be with our family."

The daylong stream of buses had been halted late Thursday.

"We've actually reached capacity for the safety and comfort of the people inside there," American Red Cross spokeswoman Dana Allen said shortly before midnight. She said people were "packed pretty tight" on the Astrodome floor.

Despite the crowding at the Astrodome, some more buses were being loaded Friday at the Superdome in New Orleans.

Tina Miller, 47, had no shoes and cried with relief and exhaustion as she walked toward a bus Friday. "I never thought I'd make it. Oh, God, I thought I'd die in there. I've never been through anything this awful."

Inside the Astrodome, doctors were having trouble keeping up with everyone needing treatment. "Many people might think there are enough people here, and there are not. We just need help," said Dr. Steven Glorsky, who had treated evacuees for heart attacks, open wounds and diabetes. "We have a crisis in there."

The Astrodome in Houston was set up to take in evacuees who were moved from the Superdome in New Orleans. More than 11,000 people were let into the Astrodome before officials decided it was full early Friday and began housing people in the adjacent Reliant Center. Houston was expected to receive at least 25,000 people.

In Dallas, lifelong New Orleans resident Betty Lewis was among the 3,800 Katrina survivors taking refuge at Reunion Arena. She left behind her two brothers when she heeded evacuation orders and fled for Dallas on Sunday.

In San Antonio a large warehouse at the city-owned industrial complex Kelly USA, a former Air Force base, was set up to take in evacuees.

At least a dozen busloads of Louisiana refugees - some wearing sweat suits and flip-flops and drinking pink lemonade - started to arrive Friday afternoon.