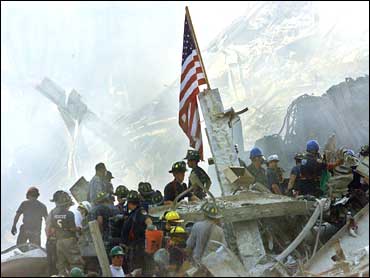 A new survey of Sept. 11-related illnesses has found an alarming increase in asthma — 12 times higher than normal — among those who toiled on the toxic debris piles of Ground Zero.

The study was released Monday by the New York City Department of Health, based on responses gathered by the World Trade Center Health Registry.

The data show 3.6 percent of the 25,000 rescue and recovery workers in the registry reported developing asthma after working at the site — more than 12 times the expected figure for adults over a similar time period.

"The risk was significantly elevated for fire and rescue workers, medical workers, and police and military personnel compared to volunteers," according to the study published in the journal Environmental Health Perspectives.

Firefighters, police officers, construction workers and volunteers swarmed to the site immediately after the Sept. 11, 2001 terror attacks. While most of them were from New York, hundreds or more came from across the country to help in the moment of national crisis.

Overall, workers who arrived at the disaster site on the day of the attacks and stayed more than 90 days reported the highest rate of new asthma — 7 percent. Volunteers accounted for almost one-third of those responding to the survey; firefighters accounted for about 14 percent.

Workers who reported wearing protective respirators on Sept. 11 and 12, when the contamination was at its worst, had lower risk of developing adult-onset asthma, the study found.

"These findings reflect the critical importance of getting appropriate respiratory protection to all workers as quickly as possible during a disaster, and making every effort to make sure workers wear them at all times," said Dr. Thomas Frieden, the city's health commissioner.

The results buttress previous research that found 70 percent of those who worked at ground zero later suffered lung problems. The doctors who conducted that study said they expect thousands to need treatment for 9/11 illnesses, and New York politicians, including Sen. Hillary Rodham Clinton, have pushed for a $1.9 billion program to treat those workers.

The authors also said there is little pre-existing data on the prevalence of asthma among first responders — but separate research published by Swiss doctors in March in the medical journal Chest found asthma was "considerably underdiagnosed in firefighters."

The World Trade Center Health Registry was launched in 2003 to track the long-term health effects of ground zero exposure to workers, volunteers, and residents.