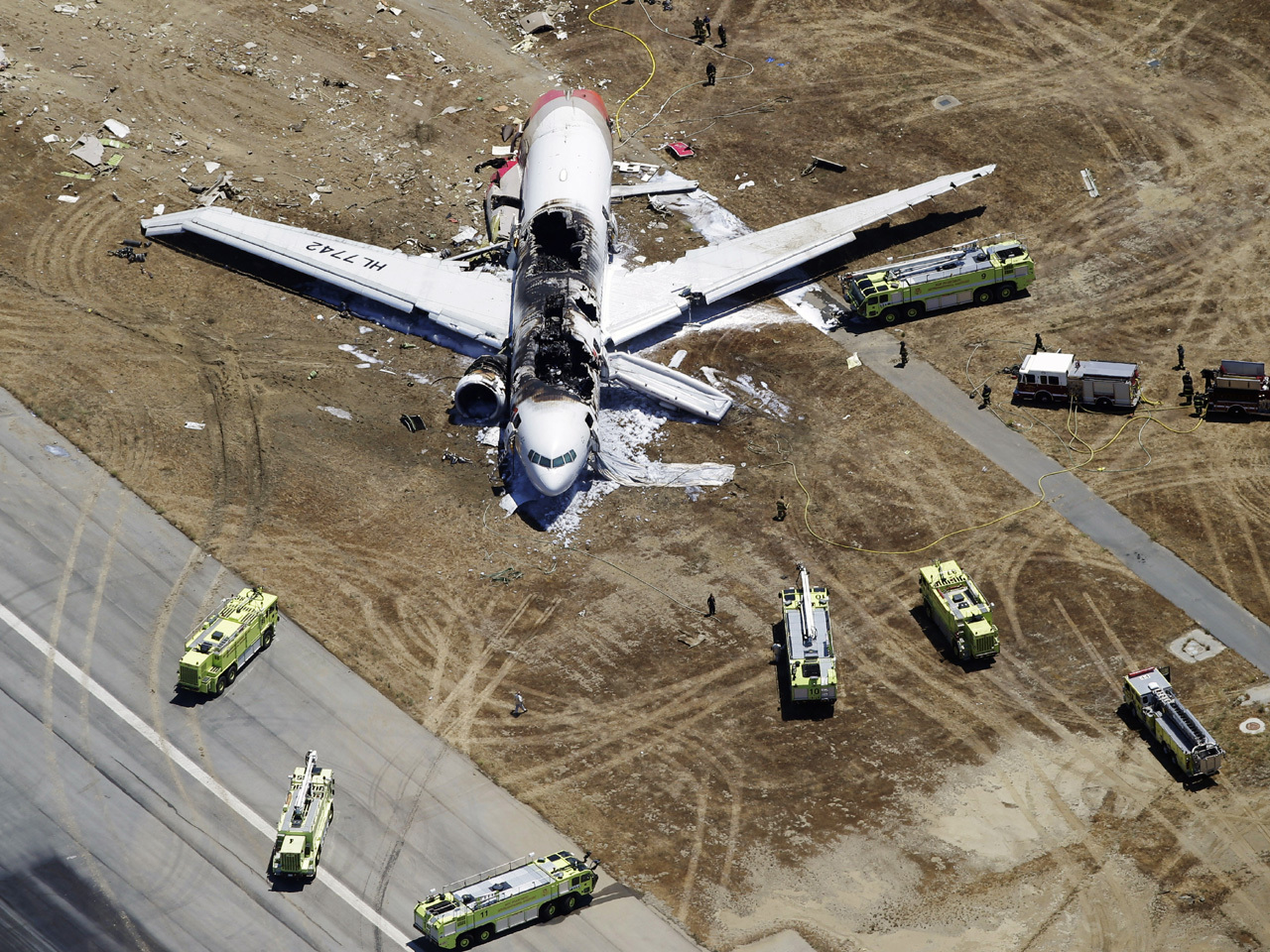 SAN FRANCISCO Officials now say they have accounted for all of the 307 people on board an Asiana Airlines flight from Seoul, South Korea, that crashed while landing at San Francisco International Airport on Saturday, killing at least two people. The crash left the runway littered with debris, and forced passengers to jump down the emergency inflatable slides to safety.

At least 181 people have been transported to area hospitals, 49 with serious injuries.

San Francisco General said early Sunday morning that the hospital had received 53 patients, including at least 26 children. Six of those patients were reported in critical condition, including one child. Hospital spokeswoman Rachael Kagan said 4 other adults and one child who arrived in critical condition have since been upgraded to serious. The ages of the children were not immediately given.

For several hours, officials were reporting 60 people unaccounted for from among passengers and crew aboard the flight. However, they now say all have been located. San Francisco Fire Chief Joanne Hayes-White said of the investigation, "This is a work in progress."

Late Saturday night, Hayes-White said the two people who died were found outside of the heavily damaged jetliner.

Asiana Airlines issued a statement that listed the number of passengers and their nationalities: 77 Korean citizens, 141 Chinese citizens, 61 U.S. citizens and 1 Japanese citizen.

Authorities said the two passengers who died were 16-year-old girls from China.

San Mateo County Coroner Robert Foucrault told the San Jose Mercury News that one appeared to have been thrown from the rear of the plane when the tail broke off, and the other was found near the wreckage. The official Chinese news agency Xinhua, quoting the Chinese Consulate in San Francisco, said both victims were from China.

The passengers from China included a teacher and 34 high school students.

A spokesperson for San Francisco General said most of the passengers taken to the hospital were Korean-speaking. "We are working to get interpreters for them," she said, "but they are quite critically injured so there is not a lot of discussion with them at this time."

The National Transportation Safety Board said in a message posted to its official Twitter account that a team of investigators had reached the airport before midnight local time to look into the circumstances of the crash. NTSB spokeswoman Kelly Nantel said Saturday that NTSB Chairman Deborah Hersman would head the team.

The FBI said there were no early indications of terrorism involved in the incident.

CBS News aviation and safety analyst Capt. Chesley Sullenberger said it was possible that ongoing construction at San Francisco International Airport would be examined as a factor in the Asiana crash.

Sullenberger, the famed Bay Area pilot who landed the "Miracle on the Hudson" flight, said the construction might have been a contributing factor impacting landings at the facility. He said that the FAA-mandated construction is intended to increase the safety zone of the runway by moving it farther away from the seawall near where the plane crash landed.

The Reuters news agency reported that a widely-used landing assistance system known as "Glide Path" had been turned off at San Francisco International for much of the summer, and while it was not unusual for the system to be turned off during good weather conditions, it would likely be another factor for investigators to consider.

"The pilots would have had to rely solely on visual cues to fly the proper glide path to the runway, and not have had available to them the electronic information that they typically have even in good weather at most major airports," explained Sullenberger.

Meanwhile, President Obama is expressing his gratitude to the first responders at the scene of the airliner crash in San Francisco. The White House says in a statement that Obama has directed his team to stay in constant contact with federal, state and local partners as they investigate and respond to the accident.

The White House says the president's thoughts and prayers go out to the families of those affected by the crash.

Early reports indicate that Asiana Airlines Flight 214 made a hard landing, with the tail of the plane striking the runway and breaking off.

The resulting fire sent black smoke billowing into the air, visible for miles.

"The plane started coming in at an odd angle, there was a huge bang and you could see the cloud of huge black smoke," Kate Belding, who was jogging near the airport at the time of the crash, told CBS Station KPIX San Francisco.

"It was a horrible thud," said Kelly Thompson, who observed the crash a hotel parking lot at the airport. She said the plane bounced, then slid on the runway.

David Eun, a Samsung executive who was on board the plane, posted a photo online showing passengers leaving the wreckage.

Rescue vehicles were on the scene immediately afterwards, with fire trucks spraying a white fire retardant on the wreckage.

Spokesperson Lt. Cdr. Shawn Lansing told CBS News that the U.S. Coast Guard flew two people with burns from the triage center via helicopter to Stanford University Hospital. The severity of the burns is unknown.

The airport was closed for several hours, with flights diverted to Oakland, Sacramento, Los Angeles, San Jose and Seattle. At about 3:30 p.m. PT, the airport announced that two runways have reopened.

Arnold Barnett, an aviation expert at MIT, told KCBS it was possible the plane could have experienced a power shortage that caused the pilot to lose control. He said a similar incident occurred involving a Boeing 777 at London's Heathrow Airport in 2008.

British Airways Flight 38 landed hard about 1,000 feet short of the runway and slid onto the start of the runway. The impact broke the 777-200's landing gear. There were 47 injuries, but no fatalities.

An investigation revealed ice pellets that had formed in the fuel were clogging the fuel-oil heat exchanger, blocking fuel from reaching the plane's engines. The Rolls-Royce Trent 800 series engines that were used on the plane were then redesigned.

Bill Waldock, an expert on aviation accident investigation, said he was reminded of the Heathrow accident as he watched video of Saturday's crash. "Of course, there is no indication directly that's what happened here," he said. "That's what the investigation is going to have to find out."

The Asiana 777 "was right at the landing phase and for whatever reason the landing went wrong," said Waldock, director of the Embry-Riddle University accident investigation laboratory in Prescott, Ariz. "For whatever reason, they appeared to go low on approach and then the airplane pitched up suddenly to an extreme attitude, which could have been the pilots trying to keep it out of the ground."

Asiana is a South Korean airline, second in size to national carrier Korean Air. It has recently tried to expand its presence in the United States, and joined the Star Alliance, which is anchored in the U.S. by United Airlines.

Asiana Airlines has established telephone numbers for inquiries regarding the crash of Flight 214. In the U.S. the number is 1-800-227-4262.

The 777-200 is a long-range plane from Boeing. The twin-engine aircraft is one of the world's most popular long-distance planes, often used for flights of 12 hours or more, from one continent to another. The airline's website says its 777s can carry between 246 to 300 passengers.

The last time a large U.S. airline lost a plane in a fatal crash was an American Airlines Airbus A300 taking off from JFK in November 2001.

Smaller airlines have had crashes since then. The last fatal U.S. crash was a Continental Express flight operated by Colgan Air, which crashed into a house near Buffalo, N.Y. on Feb. 12, 2009. The crash killed all 49 people on board and one man in a house.

Asia remains one of the fastest-growing regions for aviation in the world. Even with slowing economies in Japan and China, airlines there saw 3.7 percent more passengers than a year ago, according to the International Air Transport Association.

Finding enough experienced pilots to meet a growing number of flights is becoming a problem. A 2012 report by aircraft manufacturer Boeing said the industry would need 460,000 new commercial airline pilots in the next two decades -- with 185,000 of them needed in Asia alone.

"The Asia-Pacific region continues to present the largest projected growth in pilot demand," the report said.