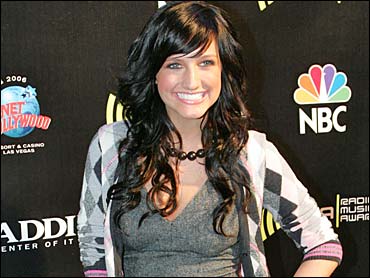 This time Ashlee Simpson sang it for real.

The 19-year-old pop artist was among a slew of stars who played Monday during the 2004 Radio Music Awards at the Aladdin hotel-casino on the Las Vegas Strip.

But whether she liked it or not, Simpson was at the center of the show thanks to a glitch on "Saturday Night Live" last weekend that revealed she had been lip-synching one of her songs.

Before she sang "Autobiography" off her hit album, host Carson Daly reassured Monday's audience they were getting a live performance.

When Simpson's band started playing, the younger sister of pop starlet Jessica Simpson screamed, "It's the wrong song." Seconds later, she told a stunned theater filled with hundreds of people that she was "only kidding."

Later in the evening, she told Daly in an off-stage interview that acid reflux disease had made her lose her voice four hours before her "SNL" appearances.

However, there is a run-through of the entire 'SNL' show 3½ hours before the live broadcast.

"It was not a fun situation. I have severe acid reflux and it was just acting up that day," she also told "Entertainment Tonight," like CBSNews.com a part of Viacom. "At 'Saturday Night Live' I completely lost my voice and everything and I have it back, and it was a good opportunity for me to be like 'I don't lip synch, my God!' I'm very anti that."

She didn't seem concerned about her slip up.

"I think my drummer got, like, really excited and maybe a little bit nervous and he pressed the wrong button. And I was like 'What do I do?' and I think I froze."

"It's a big-time performance by Ashlee," said Entertainment Tonight reporter Kevin Frazier on CBS News' The Early Show Tuesday. "She sort of bounces back and puts the national embarrassment behind her.

"You know when you're this young, when you're a teenager, a bad hair day will wreck your world so you can imagine how tough it was for Ashlee when the entire nation sees that kind of meltdown," Frazier said.

Politics also didn't spoil the night at the Aladdin, where rocker Linda Ronstadt was told to leave in July after praising "Fahrenheit 9/11," Michael Moore's unflattering documentary about President Bush.

Neither Moore nor Ronstadt appeared at the awards show but former pro wrestler Hulk Hogan made himself seen by wearing a T-shirt "Vote or Die!"

The nominees in each category were based on radio's top-playing songs. Radio program and music directors nationwide voted on the winners.

The Aladdin hotel-casino was recently purchased by an investment group led by Robert Earl, Planet Hollywood's founder and chairman.

The following is the list of Radio Music Awards winners: