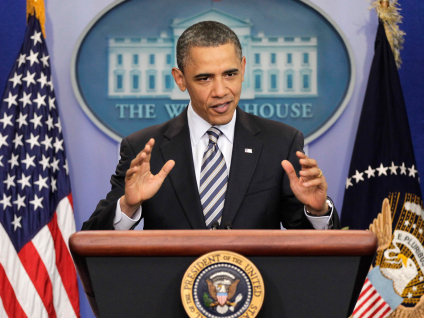 President Obama didn't utter his name, but Donald Trump was on his mind as he announced the release of his long-form birth certificate.

"We're not going to be able to solve our problems if we get distracted by sideshows and carnival barkers," Mr. Obama said (video at left). The "sideshow" and "carnival barker" were uttered like epithets at Trump and others who have persisted with the birther claims over the last several months.

Mr. Obama concluded his remarks by acknowledging that some Americans will still question his Honolulu birth origins: "I know that there's going to be a segment of people for which, no matter what we put out, this issue will not be put to rest. But I'm speaking to the vast majority of the American people, as well as to the press. We do not have time for this kind of silliness."

Mr. Obama's inferred carnival barker, however, didn't consider the birther issue was silliness, and felt vindicated and "really honored to have play such a big role" in the White House's decision to produce the long-form birth certificate.

"Today, I'm very proud of myself because I've accomplished something that nobody else has been able to accomplish," a triumphant Trump said during his press conference in New Hampshire Wednesday. "I'd want to look at it, but I hope it's true so that we can get onto much more important matters, so the press can stop asking me questions. He should have done it a long time ago."

Like the president, Trump now wants focus on answering questions about how to solve America's problems, but the question he has teed up with the press is about the president's college education.

"The word is, according to what I've have read, is that he was a terrible student when he went to Occidental," Trump said Wednesday. "He then gets to Columbia and then gets to Harvard. I heard at Columbia he was not a very good student, and then he then he gets into Harvard. How do you get into Harvard if you are not a good student? Maybe that's right, maybe that's wrong, but I don't know why he doesn't he release his records. Why doesn't he release his Occidental records?"

A reporter asked whether Trump was campaigning against Mr. Obama using innuendo. He responded, "It's not innuendo...I am just reporting what I read. Hey, I read stuff that you people write." He also said the press is "very protective of President Obama, it's not protective of me, and not protective of most other people, in all fairness."

Apparently, Trump is spending his time reading material from fringe groups intent on preventing Mr. Obama's reelection by making unfounded assertions, such as that he lied about his citizenship and that he gained entry into Harvard Law School based on something more than his academic and personal achievements, including assistance from radical Muslims.

Trump did have something to say about one foreign policy and major military issue facing the country. "The only way to go into Libya is if you get the oil. I am old-fashioned -- when you win a war it's like to the victor go the spoils."