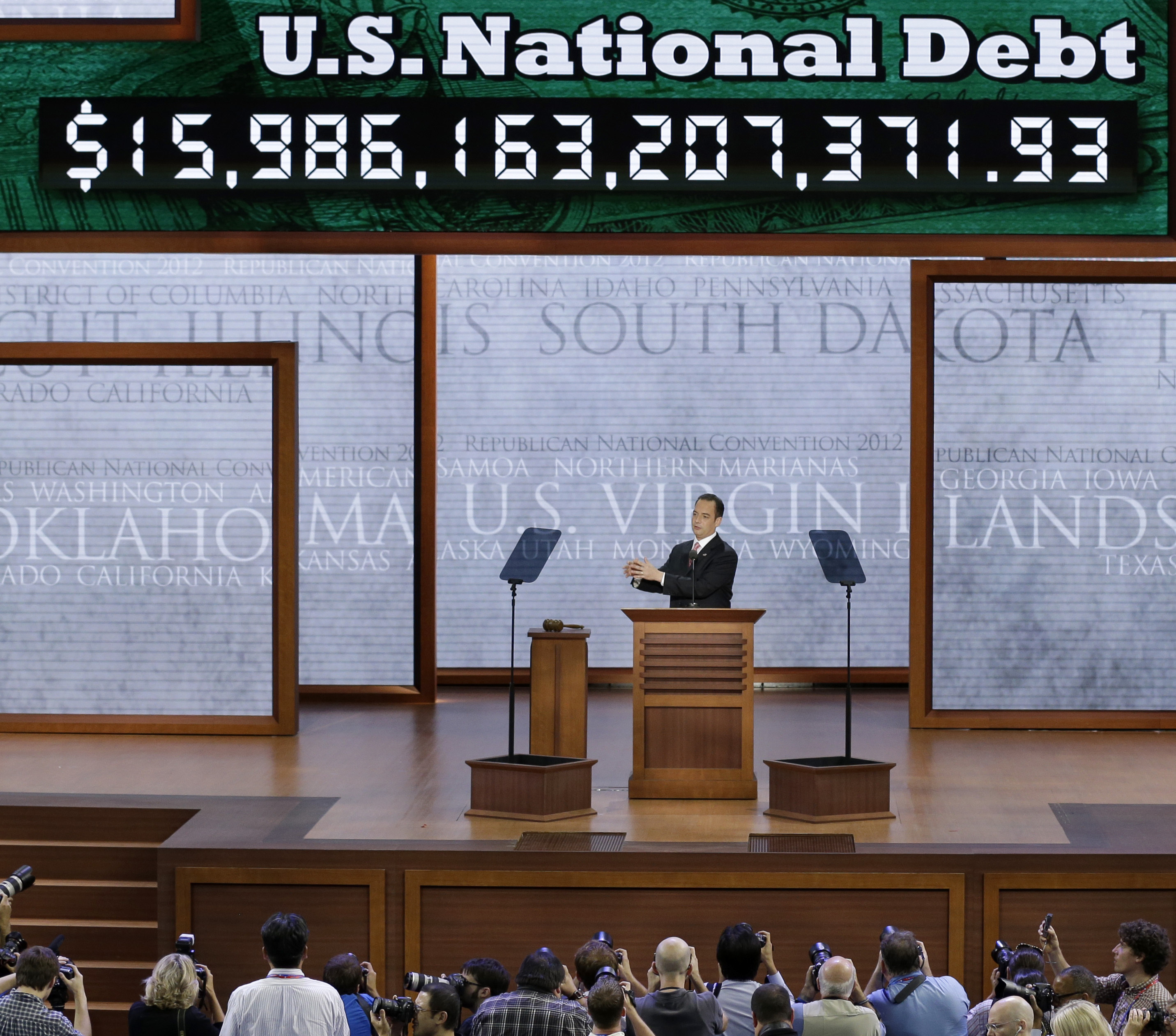 (CBS News) Hours before Democrats were set to officially kick off the Democratic National Convention, the Treasury Department on Tuesday announced that the national debt has surpassed $16 trillion for the first time in American history - giving Republicans fodder for criticism as Democrats celebrate their party and the president.

In a statement following the announcement, House Speaker John Boehner targeted President Obama's economic record, casting the news as "another sad reminder of President Obama's broken promise to cut the deficit in half."

"This debt is a drain on our economy and a crushing burden on our kids and grandkids, and it's yet another indication that the president's policies have made things worse," he argued.

"The past four years Barack Obama hasn't offered any serious solutions to get our spending under control and instead he has run 4 straight years of trillion dollar deficits," said Reince Priebus, chair of the Republican National Committee. "President Obama's budget got zero votes in Congress and we can only expect more of the same inaction in a second term."

Senator Bob Corker, R-Tenn., meanwhile, cited the number as "a new unfortunate threshold which should be a call to action for Washington to finally address the potentially debilitating challenges posed by our unsustainable deficits and debt."

"Doing so is going to require pro-growth tax reform combined with a long-term plan to restore solvency to entitlement programs, especially Medicare and Social Security," he urged. "A fiscal reform plan including these reforms would alleviate much of the uncertainty which has been holding back the private sector investment necessary to create jobs, grow the economy, and allow us to focus on being a great nation."

Sen. Jeff Sessions, R-Ala., ranking member of the Senate Budget Committee, warned that the U.S. is on a "dramatically unsustainable path," and accused the president of being "strangely unconcerned."

"This is a grim landmark for the United States. The gross debt of our federal government will, for the first time, surpass $16 trillion," said Sessions. "That's more government debt per person than Portugal, Italy, Spain, or Greece. Yet the President seems strangely unconcerned."

On Monday, Mr. Obama said he was not ready to give himself a gradeon fixing the economy, telling a reporter that he would rather give himself a rating of "incomplete."

"I would say incomplete," he told CBS affiliate KKTV in Colorado Springs. "But what I would say is the steps that we've taken in saving the auto industry, in making sure that college is more affordable and investing in clean energy and science and technology and research, those are all the things that we're going to need to grow over the long term."

Republican vice presidential nominee Paul Ryan ridiculed that notion on "CBS This Morning" Tuesday, asking, "Four years into a presidency and an incomplete?"

"[T]he president is asking people just to be patient with him," he said, attacking Mr. Obama for "picking winners and losers in the economy" and borrowing and spending money.

Continued Ryan: "I think the incomplete speaks for itself, and that is why I think we are going to win this and get this country on the right track because we're offering solutions."