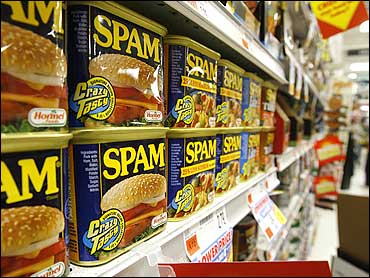 Love it, hate it or laugh at it - at least it's inexpensive.

Sales of Spam - that much maligned meat - are rising as consumers are turning more to lunch meats and other lower-cost foods to extend their already stretched food budgets.

What was once cheeky, silly and the subject of a musical (as Monty Python mocked the meat in a can), is now back on the table as people turn to the once-snubbed meat as costs rise, analysts say.

Food prices are increasing faster than they've risen since 1990, at 4 percent in the U.S. last year, according to the Agriculture Department. Many staples are rising even faster, with white bread up 13 percent last year, bacon up 7 percent and peanut butter up 9 percent.

There's no sign of a slowdown. Food inflation is running at an annualized rate of 6.1 percent as of April, according to the Bureau of Labor Statistics.

The price of Spam is up too, with the average 12 oz. can costing about $2.62. That's an increase of 17 cents, or nearly 7 percent, from the same time last year. But it's not stopping sales, as the pork meat in a can seems like a good alternative to consumers.

Kimberly Quan, a stay-at-home mom of three who lives just outside San Francisco, has been feeding her family more Spam in the last six months as she tries to make her food budget go further.

She cooks meals like Spam fried rice and Spam sandwiches two or three times a month, up from once a month previously.

"It's canned meat and it's in the cupboard and if everything else is gone from the fridge, it's there," she said.

Spam's maker, Hormel Foods Corp., reported last week that it saw strong sales of Spam in the second quarter, helping push up its profits 14 percent. According to sales information coming from Hormel, provided by The Nielsen Co., Spam sales were up 10.6 percent in the 12-week period ending May 3, compared to last year. In the last 24 weeks, sales were up nearly 9 percent.

The Austin, Minn.-based company, also known for the Jennie-O Turkey Store, has embarked on its first national advertising campaign for the 71-year-old brand in several years. They've credited the sales increase to that, along with new products like individually packaged "Spam Singles" slices. Also helping sales, executives said in an earnings conference call, was the fact that people looking to save money are skipping restaurant meals and eating more at home.

Spam sales are reaching across all spectrums, young and old and rich and poor, said Swen Neufeldt, Hormel's group product manager for the area that includes Spam. Many of the eaters are new to Spam, which was created in 1937 and gained fame as the meat that fed Allied troops during World War II.

"We have significantly increased our household penetration," Neufeldt said. "I think it's a lot of folks that are coming into the brand perhaps for the first time and coming back to the brand."

Hormel began its national advertising campaign, including print and television, for Spam in January. Neufeldt said such campaigns are planned in advance and it wasn't tied to perceived weakness in the economy.

Consumers are quick to realize that meats like Spam and other processed foods can be substituted for costlier cuts as a way of controlling costs, said Marcia Mogelonsky, senior research analyst with Mintel International in Chicago.

These products have protein and decent nutritional value, and they provide some variety to consumers who may be bored because they're eating more at home, she said.

"They might not have Spam at every single meal, but they might supplement a couple of meals," she said.

Consumers are also using more coupons and paying more attention to sales, doing anything they can to save money, she said. You may be able to cut back on your driving due to high gas prices, but you're not going to stop eating because of high food prices, she said.

Quan just bought a couple more cans of Spam on sale and some ramen, the instant noodle dish long a staple on college campuses. Her food and gas budgets are together, so she's had to cut back on food spending while the cost of gas increases. Her favorite Spam meal? Spam and macaroni and cheese. She doesn't skimp on nutrition, though. Quan serves her husband and three children - ranging in age from 4 to 11 - organic vegetables like salads, broccoli and carrots.

"It balances out," she said.

April Smith has been changing the way she feeds her family in Broken Arrow, Okla., to keep up with rising costs. This summer the 33-year-old administrative assistant will feed her two boys, ages 11 and 8, more ramen for lunch. Normally they eat the noodle soup on Saturdays, but since ramen costs about a dime per pack, they'll get it twice a week. Smith says she'll throw in some leftover frozen vegetables to make it more nutritious.

"Since it's cheap and easy, I figure why not let them eat it twice a week instead of once a week," Smith said.

Hyundai recalls 239,000 cars because seat belts can explode
Thanks for reading CBS NEWS.
Create your free account or log in
for more features.
View CBS News In
CBS News App Open
Chrome Safari Continue
Be the first to know
Get browser notifications for breaking news, live events, and exclusive reporting.