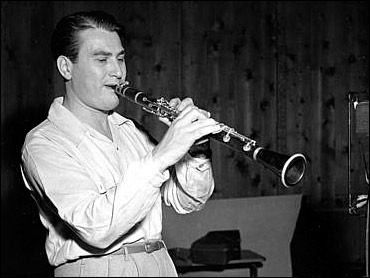 Artie Shaw, clarinetist and bandleader whose recording of "Begin the Beguine" epitomized the Big Band era, died Thursday at his home in California at the age of 94.

Shaw had been ill for some time and apparently died of natural causes, according to his longtime friend and attorney, Eddie Ezor.

At his peak in the 1930s and '40s, Shaw pulled in a five-figure salary per week and ranked with Benny Goodman, Tommy Dorsey and Glenn Miller as the bandleaders who made music swing. But he left the music world largely behind in the mid-'50s and spent much of the second half of his life devoted to writing and other pursuits.

His band's recording of Cole Porter's "Begin the Beguine" was intended to be the "B" side of the record. Instead, it became a huge hit, topping the charts for six weeks in 1938 and making Shaw famous at age 28.

Among his other hits, some with his big band and some with his quartet, the Gramercy Five: "Frenesi," "Dancing in the Dark," "Nightmare," "Back Bay Shuffle," "Accent-tchu-ate the Positive," "Traffic Jam," "They Say," "Moonglow," "Stardust," "Thanks for Ev'rything," "Summit Ridge Drive" and "My Little Nest of Heavenly Blue."

He composed some of his songs, such as "Interlude in B Flat," a 1935 work that featured an unusual combination of clarinet and strings.

He worked with such jazz legends as Buddy Rich, Mel Torme, Gordon Jenkins and, at a time when most white bandleaders refused to hire blacks, Billie Holiday.

The marriage to Keyes, best know for playing the middle of the three O'Hara sisters in "Gone With the Wind," lasted the longest, until 1985, but they led separate lives for much of that time.

"I like her very much and she likes me, but we've found it about impossible to live together," he said in a 1973 interview.

After his first burst of stardom, his good looks made Hollywood come calling. It was while filming "Dancing Coed," 1939, that he met Turner. In 1940, he appeared in another musical, "Second Chorus," and got two Academy Award nominations for his musical contributions — for best score and best song ("Love of My Life.")

A volatile and superbly intelligent man, Shaw hated the loss of privacy that stardom brought, had little use for signing autographs and once caused an uproar by calling jitterbugging fans "morons." He later said he was just referring to the rowdy ones.

"I could never understand why people wanted to dance to my music," he once said. "I made it good enough to listen to."

He chafed at having to play "Begin the Beguine" ad nauseam, wishing audiences would be more willing to accept new material. ("I mean, it's a good tune if you are going to be associated with one tune, but I didn't want that.")

He retired from performing several times — finally putting down his clarinet for good in the mid-'50s. After that, he lived in Spain for a time, operated a farm, and turned to literature full-time. He was a voracious reader since childhood, and had already produced a well-received autobiography, "The Trouble with Cinderella," in 1952.

"I did all you can do with a clarinet," he said. "Any more would have been less."

He put out two collections of short fiction, "I Love You, I Hate You, Drop Dead!" and "The Best of Intentions." He spent years working on a voluminous autobiographical novel tracing the rise of a young jazz musician, whom he called Albie Snow.

"I've lived for a long time and I've learned a few things that I'm passing on," he said.

He was recently named a Jazz Master by the National Endowment for the Arts and was looking forward to getting his award on Jan. 7. "Someone will accept for him," says Ezor.

Shaw was born Arthur Arshawsky on May 23, 1910, in New York City; his immigrant parents struggled to earn a living in the clothing business.

He began his professional career while still in his teens, first playing saxophone, then switching to clarinet to take advantage of a job opportunity.

By the time he was in his early 20s, he was a highly paid member of a CBS Radio orchestra. After the first of his many retirements from the music business, he returned to New York and began assembling his first orchestra. "Begin the Beguine" and fame followed not long afterward.

He enlisted in the Navy during World War II and wound up spending most of his time leading a band, giving shows for the troops.

An outspoken liberal, Shaw was called before the House Un-American Activities Committee in 1953 when it was investigating Communist influence in entertainment. For once, Shaw was contrite, telling committee members he had attended a couple of Communist meetings after the war because of his interest in social justice and world peace — but had never joined the party or given it any money.

"I hate to admit that I was a dupe, but I guess I was," he said. Committee members responded with sympathy, one telling him to go out and use his talent "to fight for true Americanism."

His only musical activity in recent years was conducting a revival band he organized in the early 1980s, featuring arrangements Shaw's bands had used in the past. He did not play his clarinet.

Shaw was often asked about his supposed rivalry with fellow clarinetist Goodman. He said: "Benny, who was every bit as dedicated as I was, wanted to be an instrumentalist — he was a superb technician — while I wanted to be a musician. I think my mind was more complex than his."