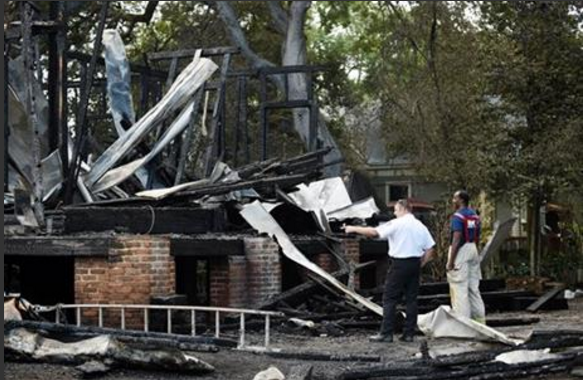 NEW ORLEANS -- Arson destroyed an antebellum plantation house that served as the governor's mansion for nine months during the Civil War and damaged a museum less than a mile away on Thursday, the Louisiana State Fire Marshal's Office said.

The Old Governor's Mansion burned to the ground, but the fire at the Louisiana Orphan Train Museum apparently burned out fairly quickly, said Brant Thompson, chief deputy for the fire marshal's office.

"We don't know whether there's any connection between the two fires. But certainly we'd not rule that out," Thompson said.

He said investigators do know both were arson. He wouldn't give details because the investigation is continuing.

The Louisiana Orphan Train Museum commemorates the trains that brought abandoned or homeless children from New York to rural homes from 1854 to 1929, and the children who rode on them.

Opelousas, about 55 miles west of Baton Rouge, was among the places to which such children were sent from the New York Foundling Hospital. Opelousas was Louisiana's capital for about nine months in 1862 and 1863, after Union troops seized Baton Rouge. When the Union Army captured Opelousas, the capital moved again, to Shreveport in northwest Louisiana.

Gov. Thomas O. Moore lived and had his headquarters in the mansion.

The dwelling was built about 1850 and bought soon thereafter by Lastie Dupre, whose father had been governor briefly in the 1830s. Lastie Dupre bought the mansion for his daughter, whose husband became lieutenant governor during the Civil War, said James Douget, president of Preservationists of St. Landry Inc.

"When the capital moved to Opelousas, Gov. Moore needed a place to stay, so they opened the house to him," Douget said.

Laws passed while the governor and Legislature were in Opelousas included the conscription law allowing Louisiana's Confederate government to draft men into its army.

Douget said the mansion had been vacant during renovations for about two years, and had been occupied by various families before that.

Douget said he'd been to the Old Governor's Mansion a week ago and again on Wednesday, and had been excited by the progress of renovations.

"It looked like it was going on fast-forward, and I was hoping it would be opened up fairly soon," he said. On Thursday, Douget said, "I saw one of Louisiana's treasures in ashes."