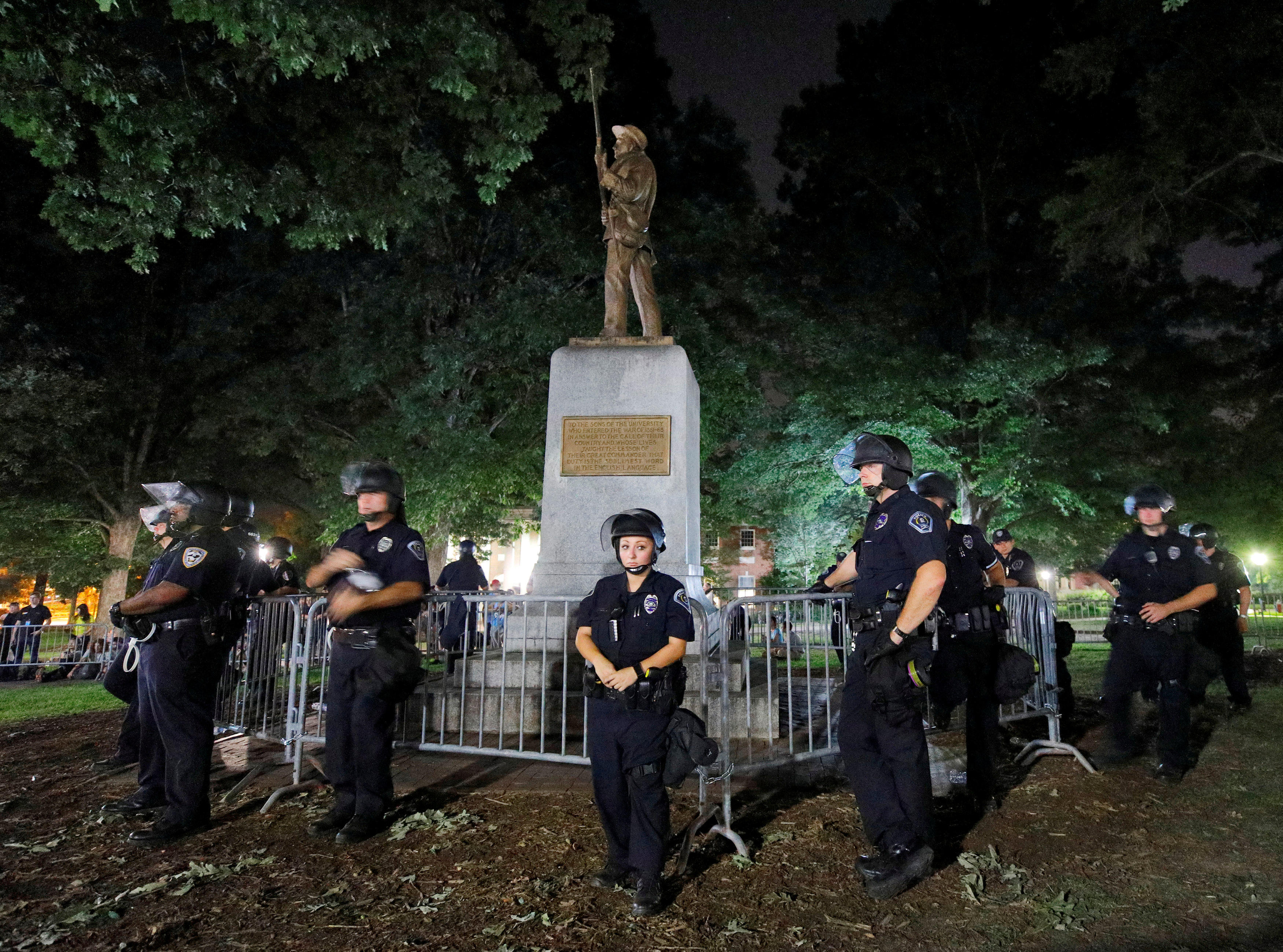 The gathering at the University of North Carolina in Chapel Hill focused on a statue known as "Silent Sam" that has stood in a main campus quadrangle since 1913.

People chanted "tear it down" while uniformed officers watched from behind temporary metal barriers ringing the statue, a figure of a Confederate soldier.

"Hey, hey. Ho, ho. This racist statue has got to go," the crowd also chanted.

They carried signs that said "Police, what are you protecting" and "Losers don't usually get trophies."

The protest was largely peaceful, but two people were arrested by UNC police and a man was arrested by Chapel Hill police, CBS affiliate WBTV of North Carolina reports.

The station also reports a man was wearing a handkerchief around his nose and mouth, which is against the rules of protesting on the UNC campus.

Around 9:45 p.m. Chapel Hill police confirmed a man was arrested for "wearing a mask on public property" and "resist, delay or obstruct a public officer." Both charges are misdemeanors.

Greg Williams, a member of Industrial Workers of the World, was later identified as the man who was arrested, Chapel Hill police said. The identity and charges against two other people were not available.

Several speakers addressed the crowd with a megaphone. One was Mario Benavente, a university senior who said the statue glorifies slavery. "It celebrates the subjugation of black and brown people," he told the crowd.

The crowd later marched through Franklin Street toward what protest leaders said was the home of the university system president. After blocking traffic for about 20 minutes, they left without incident and returned to the statue.

Not everyone wanted to see the flag toppled.

David Leeds of Durham brought a sign that said "Hands Off Sam" in big red letters. He told a reporter that he didn't support the Confederacy but was upset by the idea that protesters had broken the law in his city by tearing down a Confederate statue a week ago. He thinks people should go about protesting in a lawful manner.

Two hours into the protest, no demonstrators had breached the barriers around the statue where officers in riot gear stood.

Criticism of Confederate monuments has been intensifying since a rally earlier this month in Charlottesville, Virginia, turned violent when white nationalists opposed to the city's plan to remove a statue of Gen. Robert E. Lee clashed with counter-protesters. One woman was killed after a car plowed into a group of counter-protesters.

Ahead of Tuesday's rally, UNC Chancellor Carol Folt issued a message urging students not to attend the rally, saying it's being organized by groups not associated with the university.

"We are always concerned about safety on the campus and if we had the ability to immediately move the statue in the interest of public safety, we would," said the letter signed Monday by Folt and other administrators.

Meanwhile, the university released a statement Tuesday saying the First Amendment is core to its mission and that safety of the campus is its top priority.

"As a University, the free exchange of ideas under the First Amendment is core to our mission. Carolina has long been a hospitable forum and meeting place for the peaceful dissemination of differing views. It's important to note that the vast majority of those who attended tonight's rally honored that tradition," the statement read. "The safety of our campus and the community is our top priority and we thank the town, the county and the state for their support in this effort."

A 2015 state law generally prohibits the removal of Confederate monuments without legislative approval. University administrators also sought guidance this week from Democratic Gov. Roy Cooper, who has called for Confederate monuments to be taken down from public property around the state. The Silent Sam statue has been vandalized multiple times in recent years, and UNC administrators wrote to Cooper that they fear protesters could try to tear it down.

Cooper responded that university officials could take action under a provision of the law allowing relocation of monuments where building inspectors find safety problems. Cooper also previously called for the 2015 law to be repealed so local governments could make their own decisions about the monuments.

"If our University leaders believe there is a real risk to public safety, the law allows them to take immediate measures," he wrote to UNC system president Margaret Spellings on Monday.

North Carolina, which has more than 100 rebel monuments around the state, has become a focal point in the debate over what should be done with markers honoring the Confederacy. The Southern Poverty Law Center said the state is one of three -- along with Virginia and Georgia -- that has 90 or more such monuments.

In nearby Durham, protesters tore down a bronze Confederate statue in front of a government building last week. Days later, Duke University removed a limestone statue of Confederate Gen. Robert E. Lee from its chapel, with the school's president citing safety concerns among the reasons behind his decision.

At UNC, the Silent Sam statue was dedicated in 1913. A university website explains that the rifle-holding soldier is "silent" because his cartridge box is empty. It stands on a grassy quadrangle near residence halls and classroom buildings.