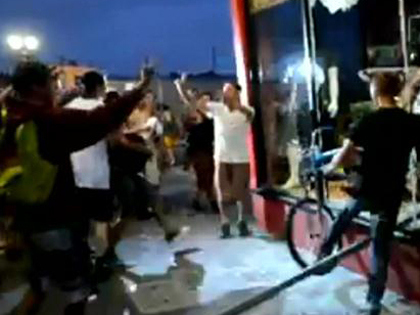 (CBS) FULLERTON, Calif. - A firefighter in Fullerton, Calif. was among those arrested Sunday following violence and vandalism after the U.S. Open of Surfing in Huntington Beach, CBS Los Angeles reports.

"I'm shocked and appalled," Huntington Beach City Councilman Jim Katapodis told CBS Los Angeles' radio station. "From a background of public safety myself, I'm always shocked to find any public safety officer, whether a firefighter or police officer, involved in something like this."

Fullerton city officials have issued a statement saying Lytle was off-duty at the time of his arrest.

"A person is allowed their rights, their due process and the fire department will take action depending on what the outcome of the investigation is," said Fullerton Fire Chief Wolfgang Knabe.

Knabe told the station that even if pending charges are dropped against Lytle, he could still face disciplinary action for violating the Firefighters' Code of Ethics.

Seven suspects were arrested in the incident and police have said more arrests are imminent as they search for additional suspects caught on video.

Complete coverage of the U.S. Open of Surfing brawl on Crimesider