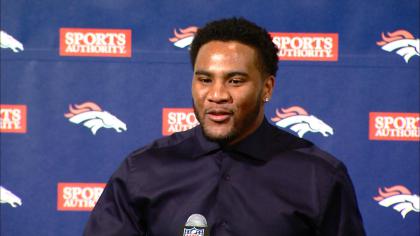 The prized free agent pickup is wanted in connection with an incident categorized both as assault and disturbing the peace from earlier in May, according to documents reviewed by the station. The arrest warrant became active Thursday.

While court records do not reveal much about what prompted the warrant, sources told CBS Denver that it was issued following a scuffle at a local strip club in which Ward was apparently involved.

"A warrant was issued," Cmdr. Matt Murray told the station. "We have been working with [Ward] to turn himself in. It's a misdemeanor assault." Murray declined to go into further detail.

Ward, formerly a Pro Bowl player for the Cleveland Browns, signed a $23 million contract with the Broncos earlier this year.

"We have been very aware of this issue and will continue to review all of the facts," said the Broncos organization in a statement.

CBS Denver reports Ward was also allegedly involved in a nightclub scuffle in Los Angeles in 2012, but was not arrested in that case.