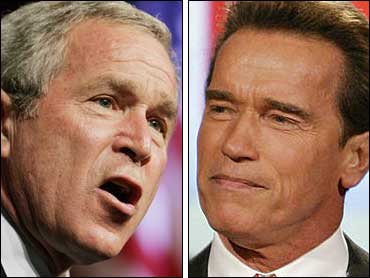 Gov. Arnold Schwarzenegger agreed Thursday to send the California National Guard to the Mexican border, ending a 17-day standoff with the Bush administration.

The two sides had been at odds over whether California Guardsmen would join the effort to bolster the Border Patrol and who would pay for it.

They reached an agreement under which California will contribute about 1,000 Guardsmen for border duty and the federal government will pick up the full cost, Schwarzenegger said.

"It is not my preference to send the National Guard, but there's an important need to protect the border," he said.

However, in a separate act that was not part of the agreement with the federal government, Schwarzenegger will sign an executive order that ends the California National Guard's participation on Dec. 31, 2008, state officials said.

Schwarzenegger intends for the mission to be carried out mostly by troops who volunteer for six- to 12-month assignments. The Bush plan called for sending Guardsmen on border duty instead of their annual two-and-three week training exercises.

The state would have to pay for normal training sessions, while long-term assignments are funded by the federal government.

Altogether, President Bush has proposed sending 6,000 National Guardsmen to the U.S. border with Mexico. The overall cost of the multiyear deployment has been put at more than $1 billion.

In California, National Guard officials have said the mobilization could begin immediately.

A planning force could reach the border within days and the full deployment could be in place by July 15, but California Guard officials said they would not send anyone until Congress approves funding for the operation. The first troops in Arizona were scheduled to be on the border Thursday.

Schwarzenegger said he would sign a memorandum of understanding between the federal government and the governors of the four southern border states. It serves as a federal promise to repay the cost of the deployment.

It also establishes rules of engagement prohibiting Guardsmen from handling detainees, but allowing them to carry guns. The rules are similar to those the California Guard follows when deploying to a riot, officials said.

The document also contains a provision allowing the border governors to decline to participate in any part of the mission they deem inappropriate.

Schwarzenegger's decision ended an awkward period for the Republican governor. He held out longer than Democratic governors in Arizona and New Mexico before saying he would send troops.

He also had risked alienating voters in a state that has repeatedly backed a tough approach on immigration — although his reluctance to send troops had been seen as popular among Hispanics.