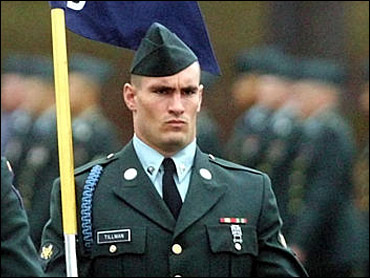 When Pat Tillman's, a former NFL player, died in Afghanistan, Pentagon officials said he was killed by insurgents who had ambushed his patrol. Army officials discovered, within days, that it was not an ambush, but rather friendly fire that killed Tillman.

But, CBS News Correspondent Lara Logan reports, the Army knew the popular footballer had been killed by fellow Rangers during a patrol in Afghanistan, but did not inform his family and the public for weeks.

The Army even allowed an emotional memorial service to take place, with testimonials from soldiers involved in the firefight, reports Logan, who has covered the Afghan campaign from its early days and traveled with U.S. Special Forces.

At the service, Tillman was awarded a posthumous Silver Star, one of the military's most distinguished honors for gallantry on the battlefield.

A new Army report shows that Gen. John P. Abizaid, the theater commander in Afghanistan, and other top Army officials were aware an investigation had determined the death was caused by an act of "gross negligence" four days before a nationally televised memorial service, the Post reported after reviewing nearly 2,000 pages of documents it had obtained.

Tillman, 27, turned down a multimillion-dollar contract with the Arizona Cardinals to join the Army after the Sept. 11, 2001, terrorist attacks. He was taking cover behind a boulder along a canyon road near the Pakistani border when a firefight erupted at twilight on April 22, 2004.

Tillman's platoon had to split up because of a broken Humvee. When the second half of the platoon rounded a corner, they mistook Tillman, another Ranger and an Afghan soldier as the enemy.

The Post reported on its online edition Tuesday night that troops on the scene said they were immediately sure Tillman was killed by a barrage of American bullets.

"I wish that I would have taken a half second to positively identify the targets," wrote one of the soldiers in the report. "Maybe CPL Tillman would still be alive or maybe the outcome would still have been the same, but at least I wouldn't have to live with the guilt and re-experience that ambush while I sleep."

The soldiers were punished by being kicked out of the Rangers.

The documents show that officers erroneously reported that Tillman was killed by enemy fire, destroyed critical evidence and initially concealed the truth from his brother, also an Army Ranger, who was near the attack, the Post reported.

The memorial service in San Jose, Calif., took place May 3, 2004. The Army announced May 29 that Tillman likely died because of friendly fire.

Brig. Gen. Gary M. Jones, who prepared the report, concluded there was no official reluctance to report the truth, according to the Post.

But an Army spokesman, Paul Boyce, told the newspaper: "Notifying families in a timely way that they have had a loved one killed or severely injured is complex and imperfect work. We can do better."

"We all should be so really angry," Bruce Snyder said. "It's so contrary to the way Pat lived his life."