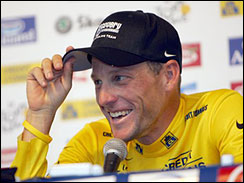 As if Lance Armstrong had anything left to prove, as if his crowning achievement really needed an emphatic stamp, cycling's greatest champion gave his best performance Saturday — claiming the stage win he lacked and all but guaranteeing a seventh consecutive Tour de France victory.

Armstrong swept away any notion that this Tour would be somehow incomplete without winning a stage, pouring on speed at the end of Saturday's time trial to round out his unparalleled career. Unlike his previous six winning Tours, the American had not won an individual stage — until Saturday's 20th.

He beat stage runner-up Jan Ullrich by 23 seconds and extended his already comfortable overall race lead to 4:40 over Ivan Basso of Italy, setting him up for a victory ride on the last leg into Paris on Sunday, when the 33-year-old will retire.

Riding with an aerodynamic bike, helmet and suit to reduce wind drag and save seconds, Armstrong made easy work of the winding, hilly and crowd-lined 34.5-mile route that looped north of Saint-Etienne in central France.

As race leader, Armstrong set out last of the 155 riders, his legs whirring, the yellow jersey on his back. He trailed Basso at the first time-check, but was leading at the second and stayed ahead from that point.

"Quite honestly, I wasn't absolutely sure I could do it," Armstrong said. "I thought Jan would be strong, and then when I got to the first check I saw that Ivan was seven seconds up and I thought 'Oh boy, this could be an interesting day."'

"I ended up turning things around and winning," he said. "So, pleasant surprise."

He even overtook Denmark's Mickael Rasmussen, who had started out six minutes before him but had a disastrous ride on the tricky and technical route's sharp bends, fast downhills and tiring uphills.

"It's nice to finish your career on a high note," said Armstrong. "As a sportsman, I wanted to go out on top."

Armstrong's time was 1 hour, 11 minutes and 46 seconds, for an average speed of 46.4 kilometers (28.8 miles) per hour. His three children were at the finish to see him climb onto the podium and don another race leader's yellow jersey — the 82nd of his career.

Armstrong said having children there was "a dream for me."

"I wanted to ride in today and ride into Paris in yellow for them," he added.

On Monday, Armstrong is taking them on holiday in the south of France, the rest of his life ahead of him. Gaunt and tanned after three brutal weeks on French roads, Armstrong said he would go to the beach, drink wine, eat and "not worry about a thing."

At this Tour, he hammered his rivals from the first day in the opening time trial, finishing second well ahead of Ullrich and other top challengers. He built on his lead in the first day in the Alps and comfortably controlled the race from that point — silencing doubters who questioned whether he still had the will and the legs to win.

Armstrong said that while he is retiring from cycling, he would keep fit and perhaps take part in mountain bike or cyclo-cross races from time to time.

The individual stage win was the 22nd of Armstrong's career. Eleven of those were time trials. Armstrong also won three team trials with his support riders.

Armstrong said he was retiring with "no regrets." Winning the Tour has brought him huge fame and fortune. "There's no reason to continue. I don't need more," he said.

"My time is up, I don't crave attention."

Ullrich's ride moved him up from fourth to third in the overall standings, displacing Rasmussen.

"I gave everything I had but it was not enough against Lance," said the 1997 Tour winner. "But I'm happy to be on the podium and to finish this Tour in good health despite the two crashes I had."

Basso placed fifth in the time trial, 1:54 behind Armstrong, but good enough to keep second place on the podium in Paris — improving on last year's third place.

"Now we can really start to party," he added.

Overall, Armstrong's lead on Basso grew to 4:40. Ullrich is 6:21 behind. Rasmussen had been in third place at the start of the stage, but crashed negotiating a roundabout, crashed again into a ditch, and had repeated mechanical problems, changing bikes several times.