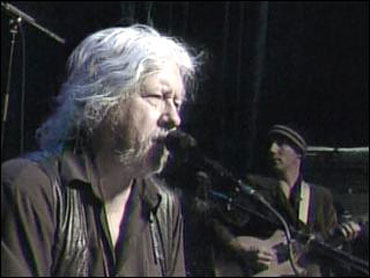 Folk singer Arlo Guthrie is taking a ride on the train called "The City of New Orleans," raising money to help musicians displaced by Hurricane Katrina.

From anti-war protests in the '70s to Farm Aid this decade, Guthrie has been in the forefront, CBS News correspondent Randall Pinkston says.

So, when Hurricane Katrina wrecked New Orleans, Guthrie knew he had to do something. A small bit of news sparked an idea.

"It said Amtrak is resuming service on 'The City of New Orleans,' " Guthrie recalls. "I said, 'Well, there's something we can do.' "

"The City of New Orleans" is a train made famous by Guthrie's version of the Steve Goodman song, which was a hit back in 1972. Now, Guthrie, his family and some of his musician friends are riding the train from Chicago to New Orleans, holding concerts en route to raise money for musicians who lost everything to Hurricane Katrina.

"In our family, singing about things is one thing, but you also have to do something," says Guthrie, whose father, Woody Guthrie, wrote "This Land is Your Land" and many other legendary folk songs.

Arlo Guthrie made his own name in folk circles with the 18-minute-long musical story "Alice's Restaurant," which has become a Thanksgiving Day staple on many radio stations.

The money raised in this latest tour will also help purchase instruments and help flood-damaged music clubs. Arlo Guthrie began by sending a mass e-mail to his friends in August, one of whom would not live to see the end of the tour.

Willie Nelson will join Guthrie for the finale.

The tour ends this week. By then, as Guthrie sings, he'll have gone "more than 500 miles on the train they call 'The City of New Orleans.' "