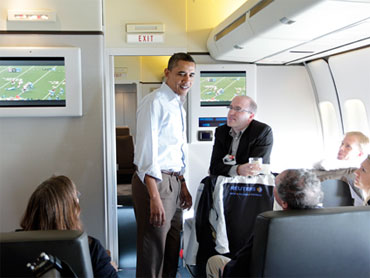 Tropical Storm Arlene weakened as it blew ashore Saturday on the Gulf Coast, but still packed enough punch that it brought sheets of rain, 20-foot waves and heavy wind to the same area that was devastated by Hurricane Ivan nine months ago.

The first named storm of the Atlantic hurricane season had threatened to strengthen to a hurricane but had sustained winds of only about 60 mph when it made landfall at around 3 p.m. along the Alabama-Florida Panhandle coast.

That was nearly the same spot where Ivan came ashore Sept. 16 with winds howling at 130 mph. Ivan was one of four hurricanes to batter Florida in the space of weeks last summer.

"This is nothing like the thing we had last year," said Kris Davis, a waitress at McGuire's Irish Pub in coastal Destin.

Initial reports of damage were minimal, including power outages and some flooding on Alabama's coastal highways. There were no immediate reports of deaths blamed on the storm Saturday, but one woman died Friday after being pulled from strong surf on Miami Beach, more than 500 miles southeast of the landfall point.

Arlene later weakened to 50 mph, but was expected to continue lashing a wide swath of the region for several hours, perhaps stretching into early Sunday. Meteorologists said as much as 8 inches of rain was possible in some areas, along with tornadoes and flooding.

Many feared that Arlene would set back the efforts to rebuild homes damaged by Ivan. Numerous homes in the region are still under repair, with flimsy plastic tarps still serving as roofing on many houses.

Even though it is not as big storm as Hurricane Ivan, which sacked the Gulf states almost nine months ago, residents here are bracing themselves for this hurricane season's first born, reports CBS News Correspondent Randall Pinkston.

"We anticipate that Arlene will probably stay at a very strong tropical storm this afternoon," Ben Nelson, Florida's state meteorologist, said Saturday afternoon. "Those warnings are up just in case."

Bob Garcia checked into a Red Cross shelter at Gulf Shores, Ala., with his son, Tommy.

Garcia said they live in a mobile home in Summerdale, Ala., and there was "no sense in taking chances" with the possibility of tornados developing as the storm plowed ashore. He was one of only 13 people in the shelter Saturday morning.

One death had been blamed on the storm, a Russian exchange student pulled from the rolling surf off Miami Beach on Friday.

From Texas to Tallahassee, people inventoried emergency kits and stocked up on staples like gas and wood. Others brought boats in to safe harbors and prepared to mount a defense, Pinkston reports.

The worst fears were in the Florida Panhandle, still reeling from Hurricane Ivan nine months ago. Piles of debris, gutted homes and storm-damaged roofs covered by plastic blue tarps are vivid reminders of Ivan's wrath.

"I was pretty shocked to see how bad it still was," said tourist Roddy Rogers, 46, of Springfield, Mo. "I've been in third-world countries and it looks kind of like that in some places."

Officials urged thousands of people in low-lying areas of three Panhandle counties to evacuate, and people flocked to hardware stores to buy generators, flashlights and other hurricane supplies. At the Islander Package and Lounge in Pensacola Beach, a sign read "Here we go again."

However, Florida officials said only about 200 people had sought refuge in Escambia and Santa Rosa counties, two areas hit hard last year by Ivan, and no one showed up at a shelter in Walton County.

"I really believe there are a lot of folks that were looking at this and saying 'OK, it's not a hurricane, it's not a Hurricane Ivan and we're probably going to be OK to stay where we are,"' said Escambia County spokeswoman Sonya Smith.

By midmorning, about 4,000 Gulf Power customers in Escambia County were blacked out, though most service was quickly restored. "It's mostly been because of tree limbs that were weakened or cracked by Hurricane Ivan," said John Hutchinson, Gulf Power's general manager of public affairs.

At 2 p.m. EDT, Arlene was centered 20 miles south-southeast of Gulf Shores, Ala., and was meandering north at 14 mph with top sustained wind near 60 mph. Meteorologists said Arlene could bring up to 8 inches of rain to some areas, plus a storm surge of up to 5 feet. A storm isn't considered a hurricane until its sustained wind hits 74 mph.

"Rainfall is definitely a concern, as well as severe weather, and not just around the storm center," Nelson said.

Hurricane watches and tropical storm warnings extended west to Grand Isle, La., and east to Destin, Fla. A tornado watch was issued for a huge swath of the Gulf region.

In Gulf Shores, Ala., residents worried about the storm undoing repairs and adding to beach erosion from Hurricane Ivan. Sue Alford had her beachside townhouse repaired but still has a big steel container of Ivan trash in front of the building.

"My biggest concern is there's so much debris around," she said.

The hurricane season began June 1 and ends Nov. 30. Last year's first storm of the season, Alex, didn't form until Aug. 1. Two weeks later, Florida was hit by the first of four hurricanes in the space of a few weeks. They caused about 130 deaths in the U.S. and $22 billion in insured wind damage.